UK’s Labour won’t back an election until no-deal is off the table: Corbyn 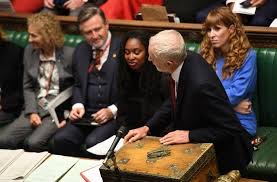 LONDON (Reuters) – Britain’s opposition Labour Party will not vote for an election until the possibility of a no-deal Brexit at the end of October has been taken off the table, Labour leader Jeremy Corbyn said on Monday.

“Until … no-deal has been taken off the table… we will not vote to support the dissolution of this house and a general election,” Corbyn told parliament in a debate about holding an early election. Britain is due to leave the European Union on Oct. 31.

“We’re eager for an election. But as keen as we are, we are not prepared to risk inflicting the disaster of no-deal on our communities.”