UK’s Johnson agrees to Brexit deal, but must now win over parliament 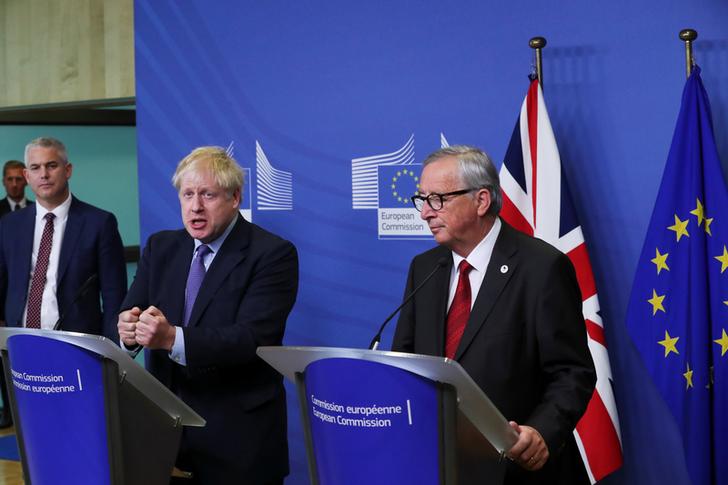 BRUSSELS (Reuters) – European Union leaders unanimously backed a new Brexit deal with Britain on Thursday, leaving Prime Minister Boris Johnson facing a battle to secure the UK parliament’s backing for the agreement if he is to take Britain out of Europe on Oct. 31.

Speaking after the EU’s 27 other leaders had endorsed the deal without Johnson in the room, European Commission President Jean-Claude Juncker declared himself pleased that an agreement had been reached but unhappy to see Britain go.

“All in all, I am happy, relieved that we reached a deal,” he said. “But I am sad because Brexit is happening.”

Those sentiments were echoed by the EU’s chief negotiator, Michel Barnier, and by Donald Tusk, president of the European Council, who has been a vocal opponent of Brexit.

“On a more personal note, what I feel today is sadness,” Tusk told reporters. “Because in my heart, I will always be a remainer. And I hope that if our British friends decide to return one day, our door will always be open.”

British and EU negotiators reached the agreement after successive days of late-night talks and nearly three years of heated discussions that have strained EU-UK ties at a time the bloc is facing a wave of euroscepticism, struggling to restart economic growth and take a stand against resurgent global powers China and Russia.

Johnson said he was confident that parliament, which will sit for an extraordinary session on Saturday to vote on the Brexit agreement, would approve the deal.

“When my colleagues in parliament study this agreement they will want to vote for it on Saturday and then in succeeding days,” he told reporters.

But the arithmetic in the vote is not simple.

The Northern Irish party that Johnson needs to help ratify any agreement, the Democratic Unionist Party (DUP), has refused to support it, saying it is not in Northern Ireland’s interests.

The head of the main opposition Labour Party, Jeremy Corbyn, said he was “unhappy” with the agreement and would vote against it. Labour has said it wants any deal to be subject to a public vote, but as yet has not indicated whether it will back any move for a second referendum on Saturday.

Johnson does not have a majority in the 650-seat parliament, and in practice needs at least 318 votes to get a deal ratified. The DUP have 10 votes. Parliament defeated a previous deal struck by Johnson’s predecessor, Theresa May, three times.

Deutsche Bank estimated there was a 55% chance parliament would reject Johnson’s deal, and other analysts thought similar.