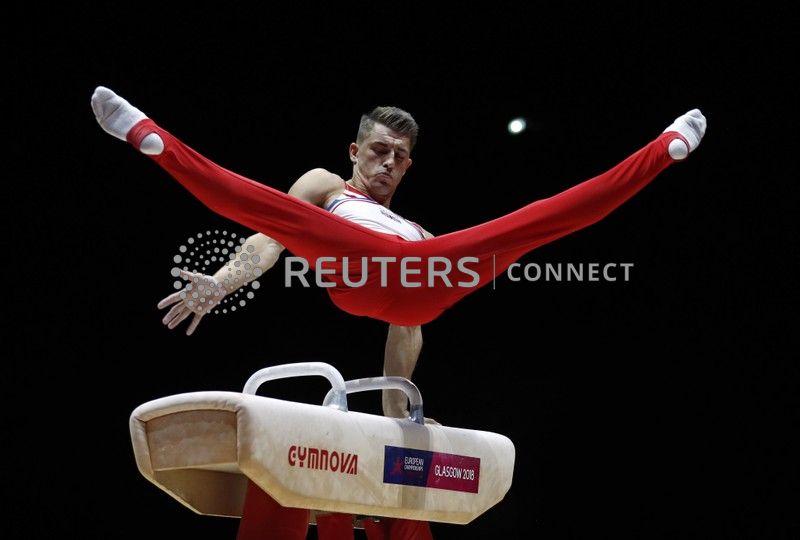 (Reuters) – With no medals up for grabs on Monday at the world gymnastics championships, the race was on for the men to secure team spots for next year’s Tokyo Olympics and Ukraine led the way in joining heavyweights Russia, China and Japan.

Four days of qualifying at the last major global event before the 2020 Olympics sealed the final team spots for Tokyo while the line-up for the individual all-around and apparatus finals in Stuttgart were also decided.

It was a bittersweet moment for Rio 2016 all around silver-medallist Verniaiev as he missed the cut for the apparatus finals, including the parallel bars where he is the Olympic champion.

Looking fatigued, he scored only 14.800 to finish outside the top eight qualifying places.

“I would go and cry and then we’ll prepare for the team final,” Verniaiev told the Olympic Channel. “Physically I don’t have enough resilience, I slowed down because of that.

“I performed just like I prepared… 51% was aimed for the team license, 49% for personal. We made it, what can you do.”

The Russian, Chinese and Japanese men had already booked their Tokyo spots by finishing on the podium at last year’s worlds in Doha.

Russia (259.928) topped qualifying after Sunday’s barnstorming qualifying run which saw reigning European champion Nikita Nagornyy set the all around pace with a total of 87.333 across six disciplines.

Kazuma Kaya’s 14.800 on parallel bars and 14.633 on pommel horse proved Japan have arrived with enough firepower to challenge for a podium finish in the team finals.

Whitlock did not have enough time to prepare for the floor at the worlds but he powered through the pommel horse routine to lead the field with a score of 15.266.

Only the top eight qualify for Wednesday’s team final at the worlds so South Korea, Brazil, Spain and Germany missed out.

American Sam Mikulak was lucky to secure the last qualifying slot for the all around final but the six-time U.S. national champion was far from pleased with his team’s overall display.

Yul Moldauer and Mikulak both faltered on the pommel horse, leaving the team with plenty of ground to cover on the remaining four apparatus.

“Today was a disaster,” the 26-year-old, who also fell during the floor exercise, told the Olympic Channel after the U.S. finished seventh in qualifying with a total of 250.359.

“I never woke up. That’s the best way I can put it.

“Honestly, this is probably the worst we will ever be in a competition collectively.”

Mikulak’s own chances of qualifying for Friday’s all-round final looked in jeopardy before team mate Akash Modi slipped off the horizontal bar, handing the twice world medallist a lifeline.

He approached the high bar needing to score more than 14.565 to finish among the top-two Americans and earned 14.866 on the apparatus where he grabbed bronze in Doha.

“I was just happy that I finally lived up to my expectations and my potential,” he said.

“Unfortunate it took so long to do that, but I got one in there and I can hope that’s the standard I can set moving forward.”