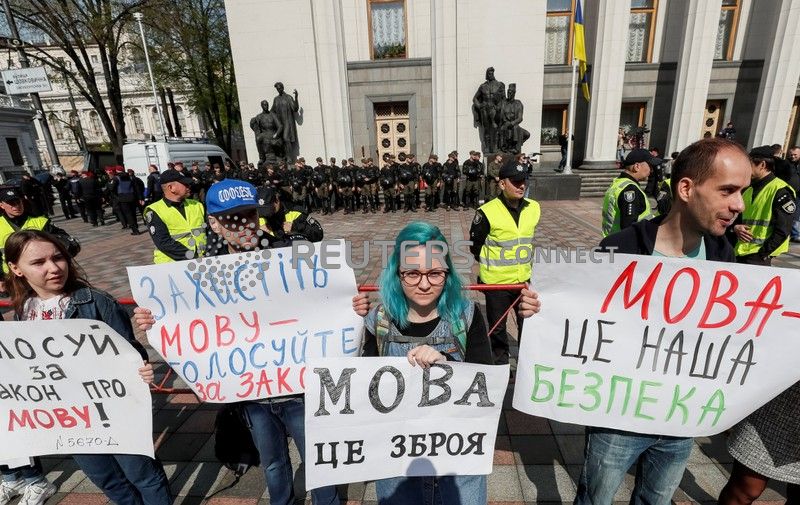 Activists attend a rally to demand lawmakers vote for a law that grants special status to the Ukrainian language and introduces mandatory language requirements for public sector workers, in front of the parliament building in Kiev, Ukraine April 25, 2019. REUTERS/Gleb Garanich

KIEV (Reuters) – Ukraine’s parliament approved a law on Thursday that grants special status to the Ukrainian language and makes it mandatory for public sector workers, a move Russia described as divisive and said discriminated against Russian-speakers.

The law, which obliges all citizens to know the Ukrainian language and makes it a mandatory requirement for civil servants, soldiers, doctors, and teachers, was championed by outgoing President Petro Poroshenko.

He is expected to sign it into law before he leaves office in coming weeks after losing re-election on Sunday to Volodymyr Zelenskiy, an actor who mainly speaks Russian in public.

Ukrainian is the predominant language in western Ukraine, while Russian is predominant in much of the east. Both languages are spoken widely in the capital Kiev, and a large proportion of the population speaks both fluently.

Television is often bi-lingual, with talk show hosts and their guests slipping between the two languages, sometimes asking questions in one and answering them in another.

Language has become a much more sensitive issue since 2014, when a pro-Russian president was toppled in a popular revolt and Russia responded by annexing the Crimea region and backing a pro-Russian separatist uprising in the east.

The separatists argued in part that easterners were victims of growing discrimination against Russian-speakers. Some Ukrainian-speakers argue that the prominence of Russian is a legacy of the Soviet era that undermines Ukraine’s identity.

Poroshenko put promotion of the Ukrainian language at the heart of his unsuccessful re-election campaign.

Zelenskiy, who played a schoolteacher-turned-president in a Russian-language comedy series on Ukrainian TV before launching his political career, said on Thursday his team would examine the new law to see if the rights of all citizens were respected.

“We must initiate and adopt laws and decisions that consolidate society, and not vice versa,” he wrote on Facebook.

Zelenskiy said the draft law’s origins during the electoral cycle “made it hostage to political rhetoric”, adding that it was hard to predict the consequences of adopting the law.

Maria Zakharova, a spokeswoman for Russia’s Ministry of Foreign Affairs, said the new law would deepen divisions within Ukrainian society and impose severe limitations, including in some cases bans, on the use of Russian in Ukrainian public life.

Viktor Medvedchuk, a prominent figure in Ukraine’s Russia-friendly opposition, said it violated the constitutional rights of millions of Ukrainian Russian-speakers.

The new legislation requires TV and film distribution firms to ensure 90 percent of their content is in Ukrainian and for the proportion of Ukrainian-language printed media and books to be at least 50 percent.

Computer software must also have a Ukrainian-language interface although the law also allows the use of English or any other official language of the European Union.

Lawmakers gave a standing ovation after the law was passed and sang the national anthem. Hundreds of people with Ukrainian flags had gathered outside parliament to support the law.

The make-up of the parliament has not changed since Zelenskiy’s election win and remains dominated by a coalition supportive of Poroshenko.