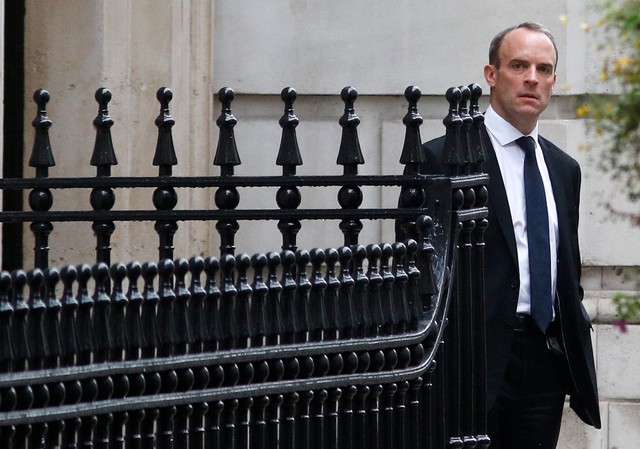 Britain's Secretary of State for Exiting the European Union Dominic Raab waits for his car to arrive as he leaves Downing Street in London, Britain, October 15, 2018. REUTERS/Peter Nicholls

LONDON (Reuters) – Britain’s Brexit minister Dominic Raab wants the European Union to accept assurances that the country will remain tied to the bloc’s rules for longer in return for making a hotly contested so-called backstop for Northern Ireland unnecessary.

Talks between Britain and the European Union have stalled over a disagreement over the backstop – an insurance policy to ensure there will be no return to a hard border on the island of Ireland, a former focal point for sectarian tensions, if a future trading relationship is not in place in time.

Raab writing in the Sunday Telegraph newspaper said Britain’s proposal to extend its Brexit transition period should be an “alternative” to the insurance plan.

“The Prime Minister has rightly refused to rule out considering different approaches – including extending the implementation period for a limited period of a few months, as an alternative to the backstop,” he said.

But so far the European Union has said the backstop on the island of Ireland must remain in place to proceed with the divorce negotiations.