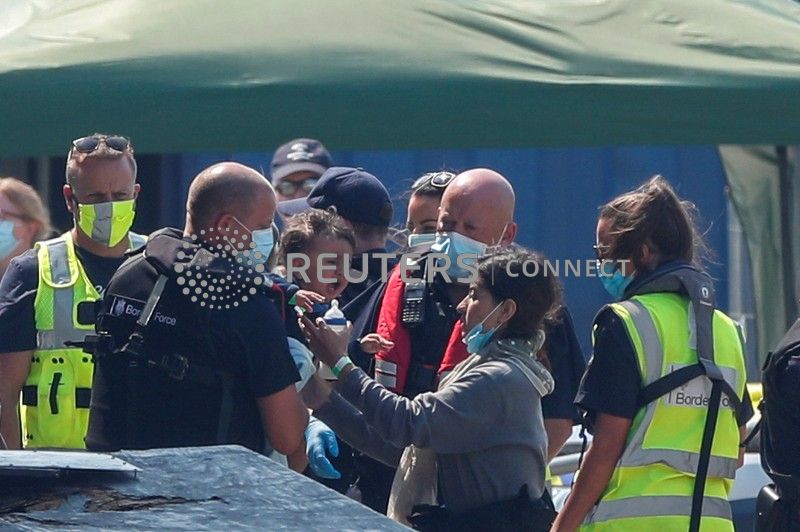 LONDON (Reuters) – Britain appointed a commander on Sunday to lead its response to illegal small boat crossings across the Channel and said it was exploring tougher action after a spate of migrant arrivals.

Taking advantage of calm sea conditions, hundreds of people including children and pregnant women have made the dangerous crossing in recent days in rubber dinghies and small vessels.

On Sunday, the UK’s Border Force said it was dealing with “ongoing small boat incidents” off the coast of Kent in southern England, 33-km (21-mile) across the Channel from France.

He will “urgently explore tougher action in France”, a statement from the interior ministry said on Sunday, referring to plans to intercept boats at sea and try to return them.

The government asked Britain’s armed forces to help deal with the boats carrying migrants on Saturday, when the interior ministry said 15 vessels were brought to the UK carrying 151 migrants.

UK and French officials are set to hold talks next week and Britain’s Sunday Telegraph newspaper said France was set to ask Britain to pay 30 million pounds ($40 million) to bolster its policing of the maritime border in the Channel.

A French interior ministry spokesman neither confirmed nor denied the report.

“There will be discussions this week to continue the strengthening of bilateral cooperation in the fight against illegal crossings of the English Channel,” the spokesman said.

O’Mahoney said he wanted to focus on ending the “heinous crime” of people smuggling across the Channel. He has previously worked as director of the UK’s Joint Maritime Security Centre and held a senior position at the National Crime Agency.