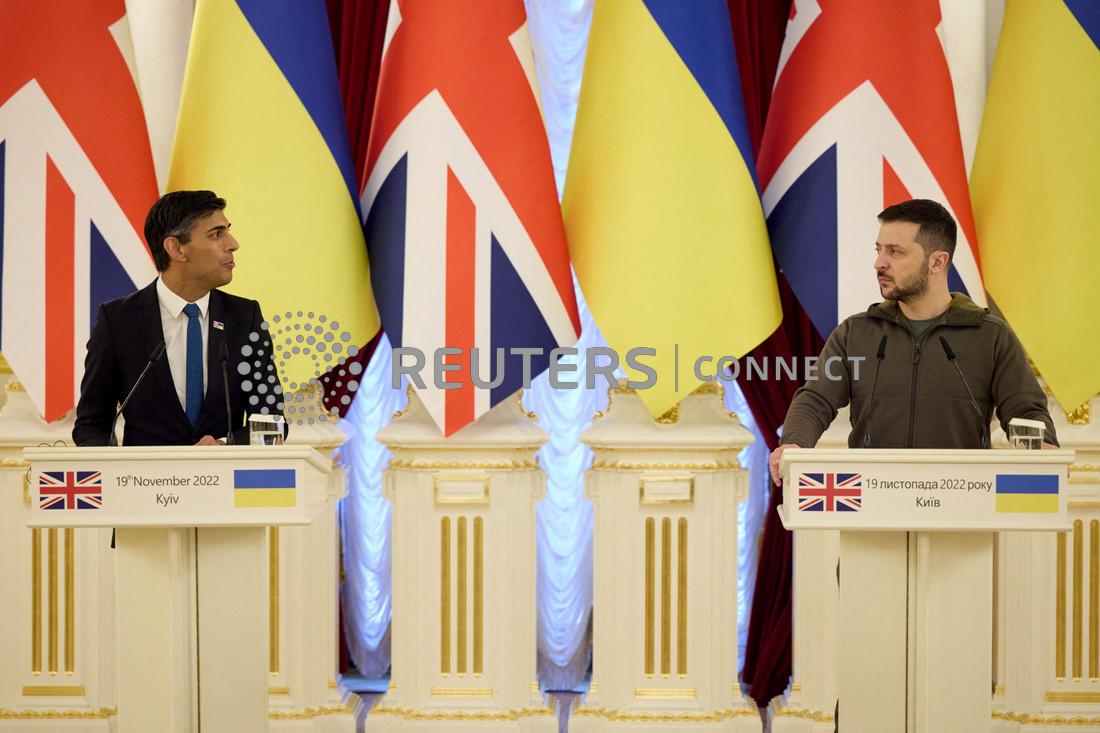 LONDON (Reuters) – British Prime Minister Rishi Sunak plans to promise on Monday to maintain or increase military aid to Ukraine next year, and to confront international competitors “not with grand rhetoric but with robust pragmatism”.

British government support for Ukraine has remained unchanged, despite turmoil in recent months as Boris Johnson was succeeded as prime minister by Liz Truss and then Sunak.

However, some Conservatives view Sunak as less hawkish on China than Truss – although a planned meeting between Sunak and China’s President Xi Jinping at this month’s G20 summit in Bali fell through and last week London banned Chinese-made security cameras from sensitive government buildings.

“Under my leadership we won’t choose the status quo. We will do things differently,” Sunak said in an extract released by his office of his first major foreign policy speech, which he plans to deliver on Monday in London’s financial district.

Sunak said his priorities would be “freedom, openness and the rule of law”.

European Union officials have questioned whether Britain under Johnson was genuinely committed to its Brexit legal agreements, especially regarding Northern Ireland.

On Ukraine, Sunak indicated no change with the policy pursued by Johnson and Truss.

“We will stand with Ukraine for as long as it takes. We will maintain or increase our military aid next year. And we will provide new support for air defence,” he said.

In September Britain said it was the second largest military donor to Ukraine after the United States, providing 2.3 billion pounds ($2.8 billion) of aid this year.

Sunak said Britain needed to take the same long-term approach as its adversaries and competitors, who he did not name directly in the speech extracts, and that Britain should make “an evolutionary leap” in its approach to foreign policy.

“It means delivering a stronger economy at home – because it is the foundation of our strength abroad. And it means standing up to our competitors, not with grand rhetoric but with robust pragmatism,” he said.

Sunak has previously described China as a “systemic challenge” and “the single biggest state threat to our economic security”.