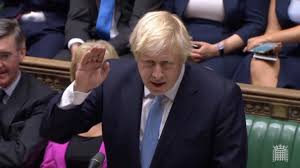 LONDON (Reuters) – British Prime Minister Boris Johnson vowed to secure a divorce deal with the European Union at a crucial summit in October, after lawmakers voted for a second time to reject his bid to hold a snap election.

Johnson had wanted to hold an election in mid-October, before a European Union summit on Oct. 17 and before the country is due to leave the bloc on Oct. 31.

“This government will press on with negotiating a deal, while preparing to leave without one,” Johnson told parliament.

“I will go to that crucial summit on October the 17th and no matter how many devices this parliament invents to tie my hands, I will strive to get an agreement in the national interest.

“This government will not delay Brexit any further.”