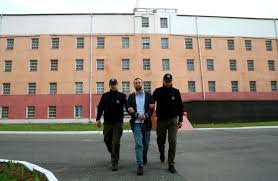 Jack Shepherd, who went on the run last year after killing a woman in a speedboat crash on the River Thames, is escorted during his extradition in Tbilisi, Georgia April 10, 2019. The Ministry of Internal Affairs of Georgia/Handout via REUTERS

LONDON (Reuters) – A British man who went on the run last year after killing a woman in a speedboat crash on the River Thames has returned to Britain after being extradited from the former Soviet state of Georgia, UK prosecutors said on Wednesday.

Jack Shepherd, 31, was convicted in his absence last July of the manslaughter by gross negligence of Charlotte Brown, 24, and sentenced to six years in jail.

He will appear in court in London on Thursday to be sentenced in person for the death of Brown.

“Jack Shepherd has returned to the UK to face justice,” Angela Deal, head of extradition at the Crown Prosecution Service, said.

“He will first appear at the Old Bailey to be sentenced for the gross negligence manslaughter conviction in connection with the death of Charlotte Brown, and then at a later date in the south west over the grievous bodily harm charge.”

After months on the run, Shepherd turned himself in to police in Georgia earlier this year, telling a court he was agreeing to extradition so he could take part in an appeal process.

Shepherd took Brown for a ride on a speedboat in December, 2015 during a first date.

Shortly before midnight, the boat hit floating debris and both were thrown into the water. Shepherd was found clinging to the hull but Brown was pulled from the water unconscious and died from cold water immersion.

Prosecutors said Shepherd was drunk and that neither he nor Brown was wearing a life-jacket.