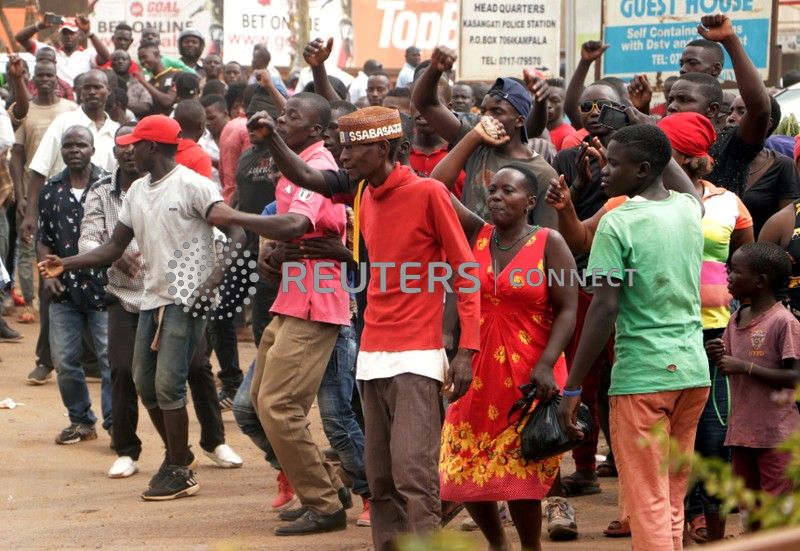 Supporters of Ugandan musician turned politician, Robert Kyagulanyi also known as Bobi Wine chant slogans outside his home after he arrived from the U.S. in Kampala, Uganda September 20, 2018. REUTERS/Francis Mukasa/Files

KAMPALA (Reuters) – Uganda’s government is proposing regulations including vetting new songs in a move critics say is aimed at discouraging negative comments about the authorities who are rattled by the popularity of pop star Bobi Wine.

The 36-year-old singer turned opposition politician, whose real name is Robert Kyagulanyi, has amassed a large following among the country’s disillusioned youths for the biting criticism of the government contained in his lyrics.

In power since 1986, President Yoweri Museveni, 74, is widely expected to seek re-election at the next polls in 2021.

Peace Mutuuzo, junior minister for gender, labour and social development, told Reuters in an interview the new regulations to govern the music and entertainment industry were already drafted and expected to be passed by cabinet by March.

Among the regulations are a range of restrictions including requiring artists to submit lyrics for songs and scripts for film and stage performances to authorities to be vetted.

Content deemed to contain offensive language, to be lewd or to copy someone else’s work, will be censured, the minister said. Musicians will also have to seek government permission to perform outside Uganda.

“We cannot continue condoning as a country abusive language. This is one thing we know has been happening within the creative industry. People compose songs to abuse others,” Mutuuzo said.

Musicians and other artists will also have to register with the government and obtain a practising licence which can be revoked for a range of violations.

“Any artist or entertainer who is in gross breach of the guidelines shall have his/her certificate revoked,” a copy of the proposed regulations seen by Reuters reads.

Museveni’s critics say he has become increasingly intolerant of dissent as his support has waned, with security forces often putting down opposition rallies and protests with teargas, beatings and detentions.

John Segawa, an actor and film director, told Reuters the new rules were meant to intimidate artists critical of the government.

“Where is our right to free expression guaranteed in the constitution if we need to submit our works for approval?,” he said.

Authorities have recently cancelled several planned performances by Bobi Wine, who has accused the government of seeking to cut him off from a key source of income as retribution for his anti-government stance.

Uganda human rights lawyer Ladislas Rwakafuzi described the regulations as “a punishing political move” to send a message to Bobi Wine and other critical voices in the entertainment industry.