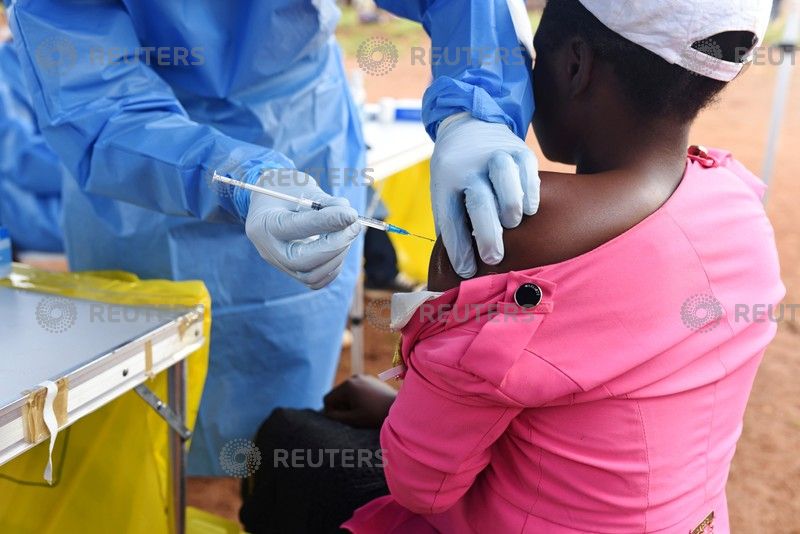 FILE PHOTO: A Congolese health worker administers Ebola vaccine to a woman who had contact with an Ebola sufferer in the village of Mangina in North Kivu province of the Democratic Republic of Congo, August 18, 2018. REUTERS/Olivia Acland/File Photo

KAMPALA (Reuters) – Uganda says it will start to vaccinate some of its health workers against Ebola on Monday, amid fears that the viral haemorrhagic fever could spread from Democratic Republic of Congo which is battling an outbreak.

The East African country has suffered regular outbreaks of Ebola and Marburg over the years, both high-fatality viral haemorrhagic fevers.

Parts of Uganda’s western border are about 100 km (62 miles)from sites of an Ebola outbreak taking place in Congo.

Tens of thousands cross the border in both directions weekly for trade and family visits and other purposes, Aceng said.

Because of this the “risk of cross border transmission was assessed to be very high … hence the need to protect our health workers with this vaccine,” she told a news conference.

Congo declared an outbreak of Ebola on Aug. 1 and there have been at least 139 deaths

Because of the short distance from the outbreaks in Congo, Uganda has been on high alert, with heightened screenings of arriving travellers and training of health personnel in border areas.

Uganda’s worst Ebola outbreak was in 2000 when 425 people were infected, more than half of whom died.