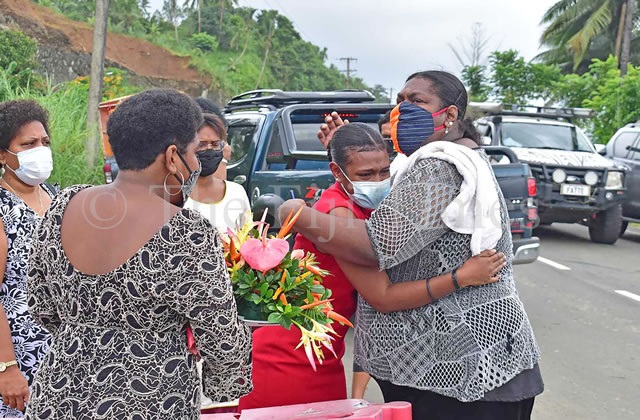 Adi Uculoa (red dress) is comforted by a relative at the Sawani border in Naitasiri on Tuesday. Picture: ELIKI NUKUTABU

Adi Uculoa says she will never forget what it felt like to watch the hearse bearing her late grandfather, the Reverend Poate Mata pass through the Sawani containment border.

She said not being able to accompany his body and to bid him farewell at his final resting place in Navolau, Naitasiri, was one of the hardest things she ever had to endure.

Ms Uculoa said her grandfather died a week ago in Suva and they had delayed his funeral in the hope that movement restrictions would be lifted.

“We thought the borders would open during the weekend so we all could come and farewell him, but when that didn’t open, a decision was made to hold the funeral today (yesterday),” she said.

“My grandfather lived in Wainivula Rd, Suva, but he wanted to be buried in his village so we had to take him there.”

Grieving relatives paid their last respects at the Sawani checkpoint and shed tears as they watched the hearse being driven through the border.