U16 football boys winless in Israel 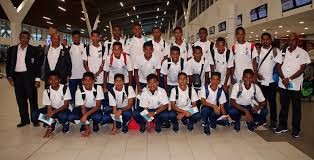 The Fiji U16 side. Picture: FIJI FA MEDIA

THE Vodafone Fiji Under-16 side lost all three matches on its tour of Israel.

Fiji lost 5-nil to Ukraine in its first pool match before going down to Ireland 3-nil.

The Fijians were thumped 7-nil by eventual winners and hosts Israel in its final pool game.

Fiji FA CEO Mohammed Yusuf said it was a good learning curve for the young players.

“It was a different league for the players. They experienced top level football for the first time and it was a good outing which will help them in future,” he said.