U.S. vertical farms are racing against the sun 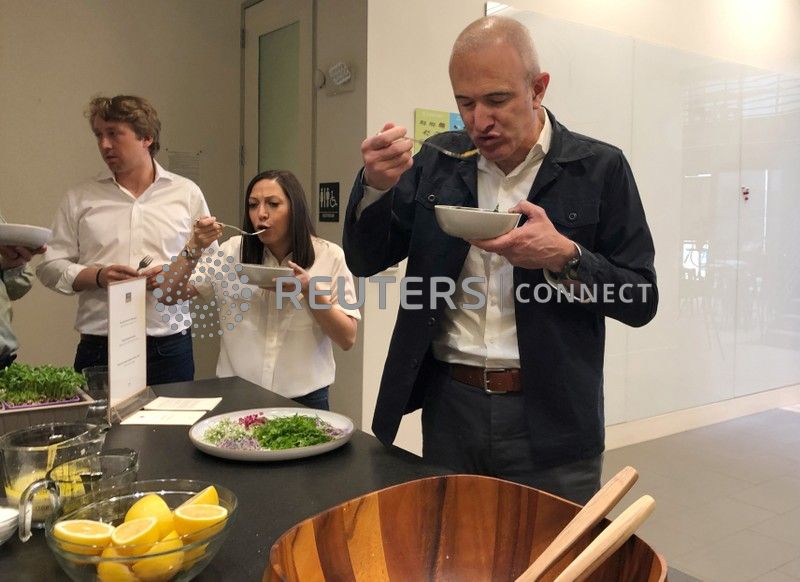 (Reuters) – Leafy salad greens grown under banks of LED lights, with mist or drips of water are having their day in the sun. Several top U.S. indoor farms, stacked with plants from floor to ceiling, tell Reuters they are boosting production to a level where they can now supply hundreds of grocery stores.

Plenty, Bowery, Aerofarms and 80 Acres Farms are among young companies that see a future in salad greens and other produce grown in what are called vertical farms that rely on robotics and artificial intelligence, along with LED lights. While the first versions of modern vertical farms sprouted about a decade ago, in recent years the introduction of automation and the tracking of data to regulate light and water has allowed them to get out of lab mode and into stores. Now they are trying to scale up.

Plenty and others say their customized, controlled lighting – some more blue light here, some more red light there – makes for tastier plants compared to sun-grown leaves and that they use 95% less water than conventional farms, require very little land, and use no pesticides, making them competitive with organic farms. And because vertical farms exist in windowless buildings that can be located in the heart of urban areas, produce does not have to travel far by fossil-fuel-guzzling trucks to reach stores.

But whether the sunless farms can compete financially with their field-grown brethren, given big upfront investments and electric bills, remains a question.

“We’re competitive with organic today and we’re working very hard to continue to make more and more crops grocery store competitive,” said Matt Barnard, chief executive and co-founder of Plenty, which is based in Silicon Valley.

Plenty said its new farm, dubbed “Tigris,” can produce enough leafy greens to supply over 100 stores, compared with its previous farm that could only supply three stores and some restaurants.

The technology world is paying attention. In its last round in 2017 Plenty raised about $200 million from investors including Japan’s Softbank, Amazon founder and CEO Jeff Bezos and former Alphabet Chairman Eric Schmidt. New York City-based Bowery raised $95 million in a fund-raising round led by Google Ventures and Temasek last year.

Bowery said its third farm coming online soon will help it supply hundreds of stores from dozens today, and Aerofarms, in New Jersey, said it is doubling its space to meet demand.

None of the three companies would give details about costs.

Former Vertical Farm CEO Matt Matros is skeptical that sunless farms can make economic sense. He invested in and ran Chicago-based FarmedHere in 2015, but changed its business into food processing.

80 Acres Farms in Cincinnati says it already grows and sells tomatoes and cucumbers, and Plenty is testing cherry tomatoes and strawberries in the lab.

Agriculture technology investor Michael Rose says vertical sunless farms are more expensive to run than modern greenhouses that rely on sunlight, supplemented by LED lights. He sees limited areas where it makes sense, such as the Middle East, where much of the food is imported, or China’s mega-cities where pollution and urban sprawl limit the availability of premium fresh food.

At Plenty’s new farm, robots put seedlings in tall, vertically hung planters. The planters move along a wall of LED lights for 10 days, and are then put through a harvesting machine that shaves off the leafy greens.

“We use no pesticides,” said Nate Storey, co-founder and chief scientist at Plenty. “We don’t even have to use things like ladybugs, because we go so fast in our production that we out-race the pests themselves.”