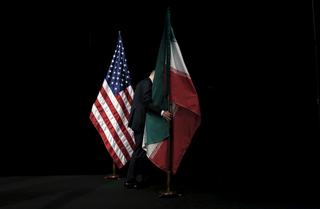 FILE PHOTO: A staff member removes the Iranian flag from the stage after a group picture with foreign ministers and representatives of the U.S., Iran, China, Russia, Britain, Germany, France and the European Union during the Iran nuclear talks at the Vienna International Center in Vienna, Austria July 14, 2015. REUTERS/Carlos Barria/File Photo

WASHINGTON (Reuters) – The United States said on Wednesday it will terminate sanctions waivers that had allowed Russian, Chinese and European companies to continue work aimed at making at Iranian nuclear sites less prone to be used to develop weapons.

The waivers, which will expire after 60 days, had covered the conversion of Iran’s Arak heavy water research reactor, the provision of enriched uranium for its Tehran Research Reactor and the transfer of spent and scrap reactor fuel abroad.

In a statement, U.S. Secretary of State Mike Pompeo did not justify his decision, which will halt some work designed to make it more difficult for Iran to potentially develop fissile material for nuclear bombs.

After the withdrawal and the revival of U.S. sanctions to cut Iran’s oil exports, Tehran has boosted its nuclear work in what analysts see as an effort to change U.S. policy or to build up Tehran’s leverage should they get into negotiations.

“The Iranian regime has continued its nuclear brinkmanship by expanding proliferation sensitive activities,” Pompeo said, saying this “will lead to increased pressure on Iran.”

However, Pompeo said the United States would extend for 90 days a waiver allowing foreign work at a nuclear power plant built by Russia at Bushehr “to ensure safety of operations.”

Alex Vatanka, an analyst at the Washington-based Middle East Institute think tank, said the United States may want to look tough to force Tehran to accept tighter nuclear restrictions or to make it harder for a new U.S. president to revive the 2015 deal. President Donald Trump is up for re-election on Nov. 3.