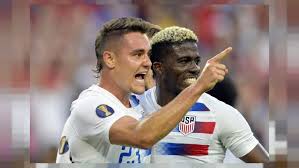 (Reuters) – The United States scored five second-half goals on the way to a 6-0 rout of Trinidad and Tobago in Ohio on Saturday to book their place in the Gold Cup quarter-finals.

The result, which also put Panama through to the next round, avenged a U.S. defeat in 2017 that saw them miss out on the World Cup for the first time since 1986.

After Aaron Long opened the scoring with a header in the 41st minute, Gyasi Zardes netted a double to make it 3-0 midway through the second period.

Christian Pulisic and Paul Arriola got in on the scoring act to make it 5-0 before Long completed the rout with his second of the game in the last minute.