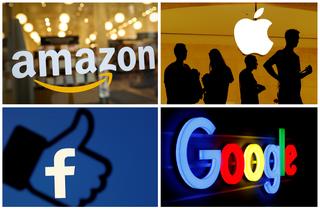 FILE PHOTO: The logos of Amazon, Apple, Facebook and Google are seen in a combination photo from Reuters files. REUTERS

WASHINGTON (Reuters) – The chief executives of the four U.S. tech giants — Amazon.com, Facebook, Alphabet’s Google and Apple — will testify before the U.S. Congress in late July as part of an ongoing antitrust probe into the companies, according to two sources familiar with the matter.

Amazon’s Jeff Bezos, Facebook’s Mark Zuckerberg, Sundar Pichai of Google and Apple’s Tim Cook will appear as part of the probe by the House of Representatives Judiciary Committee’s antitrust panel, the sources said.

The hearing will be on or around July 27 and will likely have at least some witnesses and lawmakers appearing via video link, one of the sources said. It was not clear if the four men would appear before the full committee or the antitrust subcommittee, the sources said.

The big four tech platforms are under investigation by a House Judiciary Committee panel, which is expected to issue a report in coming weeks, and the U.S. Justice Department.

The Federal Trade Commission is probing Facebook and Amazon, and U.S. state attorneys general are looking at Facebook and Google.