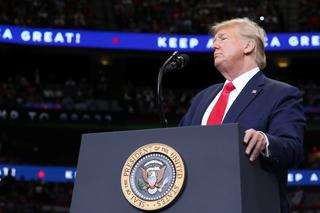 WASHINGTON (Reuters) – The U.S. Supreme Court stepped into a new immigration dispute on Friday, agreeing to hear an appeal by President Donald Trump’s administration of a lower court ruling that could frustrate a top priority of his: quickly deporting illegal immigrants.

The justices agreed to review a ruling by the San Francisco-based 9th U.S. Circuit Court of Appeals that favored a Sri Lankan asylum seeker. The 9th Circuit found that a federal law that largely stripped the power of courts to review quick deportations – known as expedited removal – violated in his case a provision of the U.S. Constitution called the suspension clause.

The case involves Sri Lankan farmer Vijayakumar Thuraissigiam, who claimed that as a member of the Tamil minority in that country he was tortured over his political ties and subjected to beatings and simulated drowning.

“It is a foundational principle of our Constitution that individuals deprived of their liberty have access to a federal court – this includes asylum seekers whose lives are in danger,” said Lee Gelernt, a lawyer for the American Civil Liberties Union who represents Thuraissigiam.

The court will hear oral arguments and issue a ruling in its current term, which ends in June 2020.

A Justice Department spokesman did not immediately respond to a request seeking comment.

Though the 9th Circuit’s ruling applied only to Thuraissigiam and did not strike down the law at issue, the court’s reasoning could still apply much more widely. The Trump administration told the Supreme Court the ruling would defeat the purpose of a system that targets specific immigrants for quick deportation, “undermining the government’s ability to control the border.”

Thuraissigiam fled Sri Lanka in 2016 and was arrested in February 2017 just north of the border between San Diego, California and Tijuana, Mexico, near the San Ysidro port of entry. He was placed on track for expedited removal, a system dating back to 1996 that makes an exception for immigrants who can establish a “credible fear” of persecution in their home country. Officials rejected Thuraissigiam’s claim of credible fear.

The Trump administration has sought to greatly expand expedited removal to apply to the majority of people who enter the United States illegally unless they can prove they have been living in the country for at least two years. This would free up detention space and ease the strains on immigration courts, according to the administration. Previously, only immigrants in the United States two weeks or less could be ordered rapidly deported.

A federal judge in Washington last month put a halt to the administration’s rule announced this year on expanding expedited removal while litigation over it continues.

At issue in Thuraissigiam’s case is the power of courts to review certain aspects of expedited removal. Under federal immigration law, courts have jurisdiction only to ensure that the government is not deporting the wrong person.

Thuraissigiam, represented by the American Civil Liberties Union, has argued that the government did not follow proper procedures or use the correct legal standard in assessing his bid for asylum.