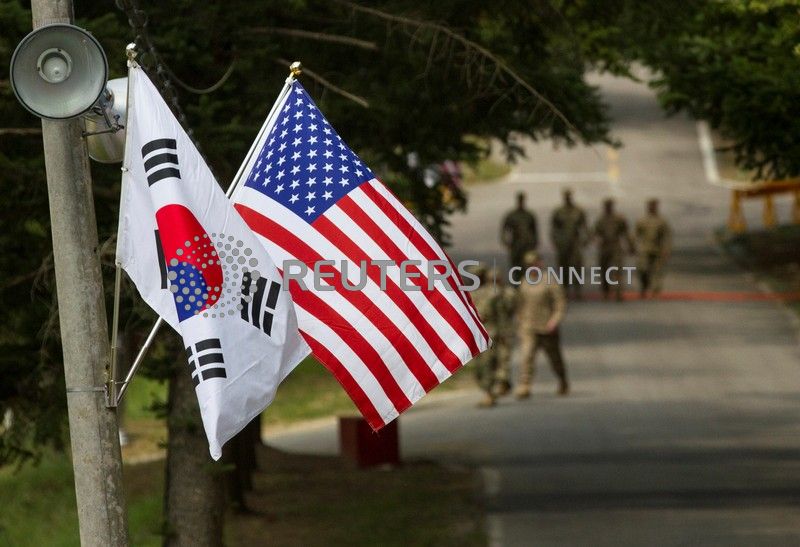 The South Korean and American flags fly next to each other at Yongin, South Korea, August 23, 2016. Courtesy Ken Scar/U.S. Army/Handout via REUTERS

SEOUL (Reuters) – The U.S. State Department has cleared $314 million (£247 million) in possible sales of air defence missiles to South Korea, the Pentagon said on Friday, as tensions re-emerge on the Korean peninsula.

South Korea, a key Asian ally of the United States, asked to buy up to 94 SM-2 missiles used by ships against air threats, along with 12 guidance systems and technical assistance for a total cost of $313.9 million, the U.S. Defense Security Cooperation Agency (DSCA) said on its website.

The agency, a unit of the Department of Defense, delivered certification on Thursday notifying Congress of the possible sale.

The proposed sale comes after North Korea recently criticised South Korea’s defence purchases from the United States, including the arrival of the first F-35 stealth aircraft.

With denuclearisation talks stalled after a second summit between North Korea and United States broke down in Hanoi in February, North Korea went ahead with more weapons tests this month.

The reclusive North and the rich, democratic South are technically still at war because their 1950-53 conflict ended in a truce, rather than a peace treaty.

North Korea has boasted about its indigenous surface-to-air missiles.

Separately, Japan, another key U.S. ally in the region, was also cleared to buy $317 million worth of medium-range air-to-air missiles from Washington, the DSCA said.