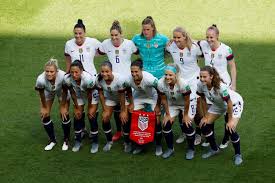 WASHINGTON (Reuters) – The U.S. Soccer Federation has reached a tentative agreement for mediation with the women’s national team to resolve complaints in a lawsuit over equal pay with the men’s team, the Wall Street Journal reported on Friday.

U.S. Soccer’s lawyers in a letter on Monday agreed to participate in mediation after the ongoing women’s World Cup concludes on July 7, the Journal said, citing people familiar with the situation.

All 28 members of the defending World Cup champion U.S. squad, who have reached the knockout stage of this year’s tournament in France, were named as plaintiffs in federal court when the lawsuit was filed in March.

The players, including stars Megan Rapinoe, Carli Lloyd and Alex Morgan, say they have been consistently paid less money than their male counterparts even though their performance has been superior to the men’s team.

The lawsuit also outlines years of institutionalized gender discrimination, claiming travel conditions, medical personnel, promotion of games and training are less favorable for female players than for their male counterparts.

“We hope their pledge to submit a proposal to solve the ongoing gender disparities is genuine,” Molly Levinson, a spokeswoman for the players, said in the report.

“It would be truly remarkable for these games to mark the beginning of pay equity. The world is watching.”

U.S. Soccer and Levinson did not immediately respond to requests for comment by Reuters.

According to the report, lawyers for the women reached out to U.S. Soccer’s lawyers after the World Cup began two weeks ago to ask if the federation would agree to mediation talks.

The report, quoting a U.S. Soccer spokesman, said that while the group welcomed the chance to mediate, it was disappointed that the news came out during the World Cup.

“We look forward to everyone returning their focus to the efforts on the field as we aim to win another title,” the spokesman told the Journal.

The U.S. women’s team, which have not conceded a goal at this year’s World Cup, finished atop Group F with a 3-0 record to set up a last-16 clash with Spain on Monday.