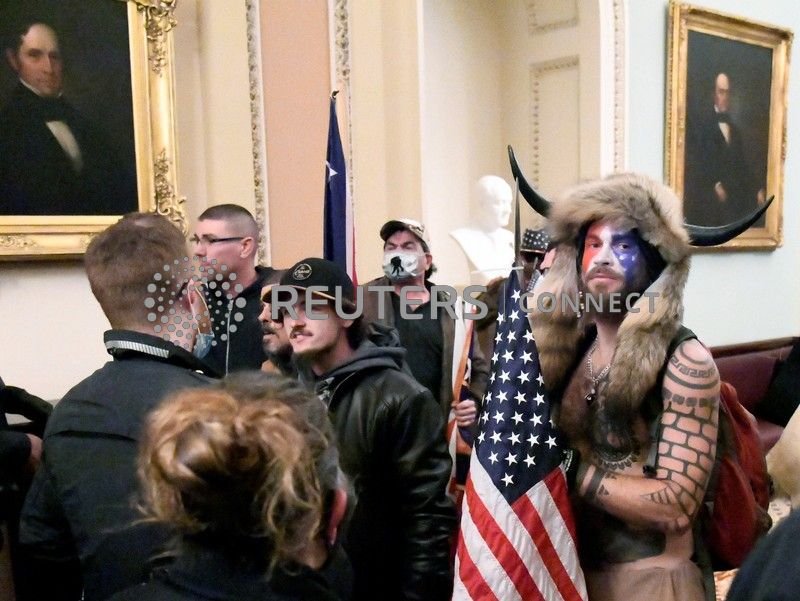 FILE PHOTO: Jacob Anthony Chansley, also known as Jake Angeli, of Arizona, stands with other supporters of U.S. President Donald Trump as they demonstrate on the second floor of the U.S. Capitol near the entrance to the Senate after breaching security defenses, in Washington, U.S., January 6, 2021. REUTERS/Mike Theiler

WASHINGTON (Reuters) – Republican leadership in the U.S. Senate is mulling the possibility of beginning an impeachment trial of President Donald Trump as early as Friday if the House of Representatives approves one article of impeachment, according to a source.

The senior Senate Republican aide, who asked not to be identified, stressed that no decisions had yet been made on whether to take that step.

Aides to Senate Majority Leader Mitch McConnell were not immediately available for comment.

McConnell had taken the position that since the Senate’s next regular meeting is set for Tuesday he could not bring the Senate back sooner for a work session without the consent of all 100 senators.

But Senate Democratic Leader Chuck Schumer has cited tools McConnell could employ to return early and has urged him to do so in order to consider a House article of impeachment.

The Senate is scheduled to hold a “proforma” session on Friday. Such sessions are normally very brief and no legislation is transacted.

The House is expected to vote later on Wednesday to approve an article of impeachment against Trump that accuses him of inciting an insurrection. If it approves that measure it would be up to the Senate to decide whether to convict the president.