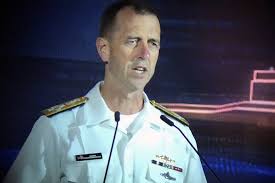 SINGAPORE (Reuters) – The head of operations of the United States Navy said on Wednesday that its freedom of navigation movements in the disputed South China Sea get more attention than they deserve.

The U.S. military said two of its warships sailed near islands claimed by China in the South China Sea on Monday last week, a move that angered Beijing at a time of tense ties between the world’s two biggest economies.

“(The operations) get more attention in the media and also have, sometimes from China, than they warrant, to be honest,” John Richardson told reporters on the sidelines of a maritime defense conference in Singapore.

China claims most of the energy-rich waters through which trillions of dollars worth of ship-borne trade passes every year. Neighbors Brunei, Malaysia, the Philippines, Taiwan and Vietnam also have claims.

In an earlier speech, Richardson said that U.S. naval operations had been consistent over decades and had not risen recently.

“I’ve done the analysis and I can state with confidence that our level of operations has been consistent over the decades,” Richardson said, adding that there had been “no spikes recently”.

Beijing denounced what the United States said was an “innocent passage” near the Gaven and Johnson Reefs in the Spratly Islands last week, saying it infringed upon Chinese sovereignty, and “damaged the peace, security and good order of the relevant seas”.

The U.S. freedom of navigation operations are aimed at challenging what it sees as Chinese activity limiting freedom of movement in the strategic waters.

In particular, the United States has criticized China’s construction of islands on tiny reefs and shoals and its installation of military facilities on them, including air strips and docks.

Richardson told reporters that he’s not surprised by China’s reaction any more.

“They’ve been, I guess, fairly increasingly consistent in their response to these but if I just got back to first principles…I just want to make sure that the U.S. Navy’s approach has been consistent. We haven’t done anything increasingly provocative or anything else,” Richardson said.