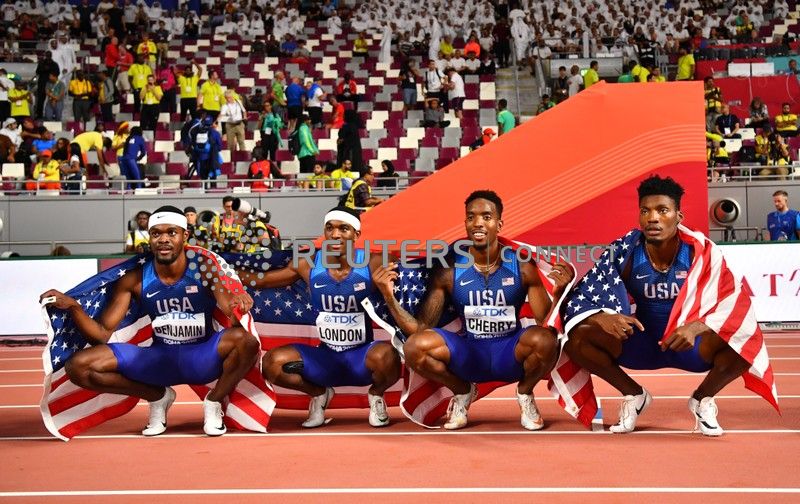 DOHA (Reuters) – The United States comfortably won the men’s 4×400 metres relay gold at the world championships on Sunday, reasserting their authority in the event and ensuring they finished top of the medals table.

Rai Benjamin, silver medallist in the 400m hurdles, completed the win as he held off Jamaica’s Demish Gaye around the final leg as the U.S won in 2:56.69 in the very last event of the championship.

The U.S. topped the medals table at the 10-day event with 14 golds followed by Kenya on five and Jamaica and China with three apiece.

The U.S. had won six successive world titles until Trinidad & Tobago claimed the gold in London two years ago.

Michael Cherry put the U.S in control when he broke away from Nathan Allan on the second leg. Terry Thomas ran a brilliant third leg for Jamaica and managed to close the gap but Benjamin charged on the last leg to secure the U.S. win.

“A lot of times we have not finished the job so tonight we were ready to face up to it collectively,” said Wilbert London, who ran the first leg for the United States.

Britain failed to finish after fumbling the baton at the second exchange.

There was a mix-up between Toby Harries and Rabah Yousif and Harries crashed onto the track, still clutching the baton.

“I just lost the lift and I didn’t place it directly in his hand. It’s my fault and I went down,” he said.