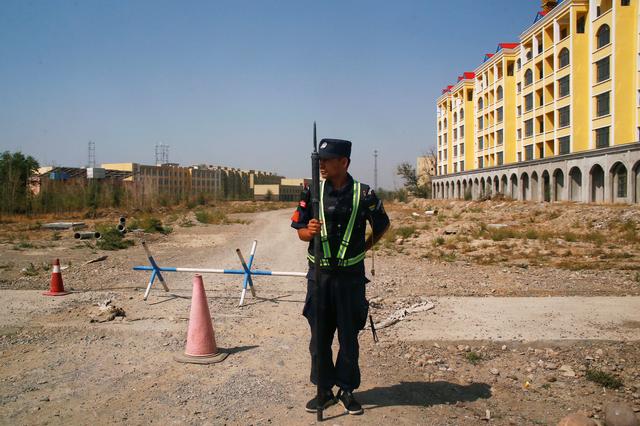 FILE PHOTO: A Chinese police officer takes his position by the road near what is officially called a vocational education centre in Yining in Xinjiang Uighur Autonomous Region, China September 4, 2018. REUTERS/Thomas Peter/File Photo

UNITED NATIONS (Reuters) – The United States and other western countries have objected to a visit by the United Nations counterterrorism chief to China’s remote Xinjiang, where U.N. experts say some one million ethnic Uighurs and other Muslims are held in detention centers.

Vladimir Voronkov, a veteran Russian diplomat who heads the U.N. Counterterrorism Office, is in China at the invitation of Beijing and is due to visit Xinjiang’s capital Urumqi, according to an email sent by his office to countries that raised concerns.

Diplomats said that along with the United States several other countries, including Britain, also complained.

U.S. Deputy Secretary of State John Sullivan spoke with U.N. Secretary-General António Guterres on Friday “to convey deep concerns” about Voronkov’s trip because “Beijing continues to paint its repressive campaign against Uighurs and other Muslims as legitimate counterterrorism efforts when it is not.”

“The Deputy Secretary expressed that such a visit is highly inappropriate in view of the unprecedented repression campaign underway in Xinjiang against Uighurs, ethnic Kazakhs, Kyrgyz, and other Muslims,” the U.S. State Department said in a statement.

China has been condemned internationally for setting up the detention complexes, which it describes as “education training centers” helping to stamp out extremism and give people new skills. Western states are worried Voronkov’s visit will validate China’s justification for the centers, diplomats said.

“China will, and is, actively saying that what they’re doing in Xinjiang is good terrorism prevention,” said a U.N. Security Council diplomat, speaking on condition of anonymity.

“The visit by Voronkov validates their narrative that this is a counterterrorism issue, when we would see it more as a human rights issue,” said the diplomat, adding that if Voronkov did not speak out after visiting Xinjiang then “silence could be seen as implicit acceptance, at worst U.N. complicity.”

The email from Voronkov’s office, seen by Reuters, said China planned the itinerary for Voronkov, whose office helps states implement a global counterterrorism strategy adopted by the U.N. General Assembly. The email said his office does “not expect any public statements” on his visit to Xinjiang.

He will be visiting Xinjiang before U.N. human rights chief Michelle Bachelet, who has repeatedly pushed China to grant the United Nations access to investigate reports of disappearances and arbitrary detentions, particularly of Muslims in Xinjiang.

“This mission is not connected in any manner to upcoming visits by other senior U.N. officials, including the High Commissioner of Human Rights. We would like to assure you that (Voronkov’s) visit is not intended to undermine or overshadow the visit of Ms. Bachelet,” the email said.

China’s envoy in Geneva said on Thursday that he hoped Bachelet would visit China, including Xinjiang, and “we hope to define a time which is convenient to both sides.” The last visit by a U.N. human rights chief to China was in 2005.

The email from Voronkov’s office said he had already visited Russia, Britain, the United States and France which, along with China, make up the five permanent veto-wielding members of the U.N. Security Council.

Human Rights Watch U.N. director Louis Charbonneau said that instead of sending Voronkov to Xinjiang, Guterres should “be calling for the immediate closure of ‘political education’ camps” and pushing for unfettered access for Bachelet and other rights experts.

Guterres raised the plight of Muslims in China’s Xinjiang region with the Chinese government’s top diplomat, Wang Yi, during a visit to Beijing in April.