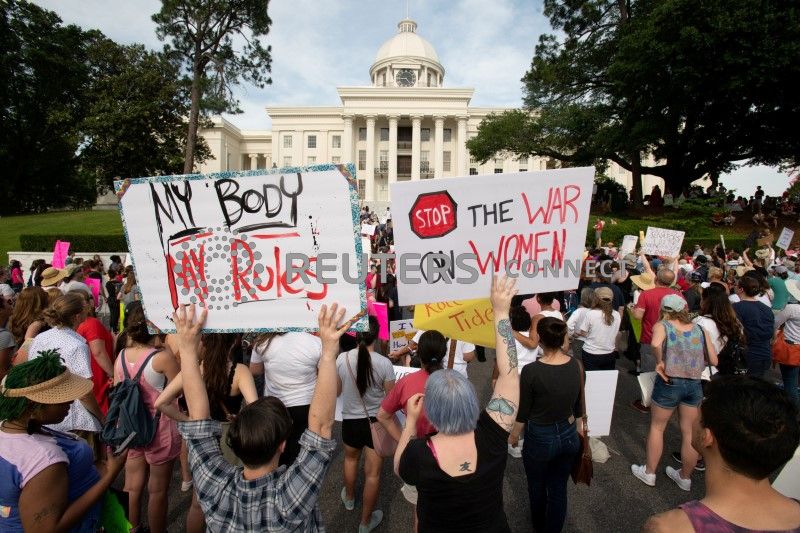 People gather at the Alabama State Capitol during the March for Reproductive Freedom against the state's new abortion law, the Alabama Human Life Protection Act, in Montgomery, Alabama, U.S. May 19, 2019. REUTERS/Michael Spooneybarger

GENEVA (Reuters) – The United Nations human rights office called on U.S. authorities on Tuesday to ensure that women have access to safe abortions, saying bans lead to risky underground abortions that can endanger a woman’s life.

Missouri’s Republican governor, Mike Parson, could sign a bill into law as early as this week that prohibits women from seeking an abortion after the eighth week of pregnancy, days after Alabama enacted the most restrictive abortion law in the United States.

“We are very concerned that several U.S. states have passed laws severely restricting access to safe abortion for women, including by imposing criminal penalties on the women themselves and on abortion service providers,” U.N. human rights spokeswoman Ravina Shamdasani told Reuters Television in Geneva.

Evidence and experience have shown that complete bans on abortions do not reduce their number, but drive them underground “jeopardising the life, health and safety of the women concerned”, she said.

Such bans are also “inherently discriminatory”, affecting women who are poor, from minority backgrounds or other marginalised communities, Shamdasani added.

“So we are calling on the United States and all other countries to ensure that women have access to safe abortions. At an absolute minimum, in cases of rape, incest and foetal anomaly, there needs to be safe access to abortions,” she said.

Missouri is one of eight states where Republican-controlled legislatures this year have passed new restrictions on abortion. It is part of a coordinated campaign aimed at prompting the conservative-majority U.S. Supreme Court to cut back or overturn the 1973 Roe v. Wade decision that legalized abortion nationwide and recognised a right under the U.S. Constitution for women to terminate pregnancies.

The most restrictive of those bills was signed into law in Alabama last week. It bans abortion at all times and in almost all cases, including when the pregnancy resulted from rape or incest, but allows exceptions when the mother’s life is in danger.

Anti-abortion advocates are aware that any laws they pass are certain to be challenged. But supporters of the Alabama ban said the right to life of the foetus transcended other rights, an idea they would like tested at the Supreme Court.