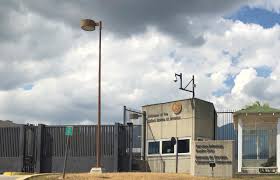 FILE PHOTO: A general view of the entrance of the U.S. Embassy in Caracas, Venezuela March 14, 2019. REUTERS/Marco Bello/File Photo

CARACAS/WASHINGTON (Reuters) – A U.S. citizen arrested in Venezuela in 2014 on weapons trafficking and attempted murder charges his family called “trumped-up” was released this week, his family said in a statement on Friday.

Todd Leininger, 37, was arrested in western Tachira state where he and his Venezuelan wife were visiting his sister-in-law, Reuters reported at the time. Tachira was then the focus of deadly anti-government protests, and authorities said he was among 58 foreign “mercenaries” detained.

Washington withdrew all remaining diplomatic personnel last month, as Venezuela suffers an economic crisis that has led to food and medicine shortages and prompted more than 3 million people to emigrate. Maduro, a socialist, calls Guaido a U.S. puppet seeking to oust him in a coup.

In its statement, Leininger’s family said he was moved from prison to prison in Venezuela and that prison officials “refused to comply” with orders for his release before he was freed on Thursday and flown to Miami.

“This was a long and often heart-breaking journey, but I am so grateful to be reunited with my son,” said his mother Barbara Leininger, who lives in Bloomington, Indiana.

Neither Venezuela’s Information Ministry nor its chief prosecutor’s office responded to requests for comment.

Speaking on the condition of anonymity, a U.S. Department of State official called Leininger’s release “long overdue,” saying a Venezuelan judge had granted him parole in May 2018 due to good behavior and that a court had ordered his release in November.

“Since that time we have been pressing for his return to the United States,” the official said, adding that the U.S. government was still concerned about six executives of U.S. refiner Citgo, a subsidiary of Venezuelan state oil company PDVSA, who have been jailed in Venezuela since 2017.

Venezuelan rights groups have frequently reported delays in authorities’ compliance with court orders for prisoners to be released.

Last year, Venezuelan authorities released an American missionary who had been held on weapons charges since 2016.

Speaking to Reuters in 2014, Barbara Leininger said her son had “some psychological issues” and had admitted to shooting a man in self-defense during what he described as an “altercation.”