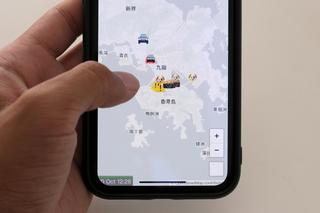 FILE PHOTO: The HKmap.live App is pictured on a phone screen in this photo illustration, in Hong Kong, China, October 10, 2019. REUTERS/Tyrone Siu

The group separately wrote Activision Blizzard Inc’s (ATVI.O) chief executive Robert Kotick, calling on him to reverse the company’s decision to ban a player who voiced support for pro-democracy protests in Hong Kong. Activision Blizzard did not immediately comment on Friday.

“You have said publicly that you want to work with China’s leaders to effect change rather than sit on the sidelines and yell at them. We, too, believe that diplomacy and trade can be democratizing forces. But when a repressive government refuses to evolve or, indeed, when it doubles down, cooperation can become complicity,” the members wrote to Cook.

Apple said on Oct. 9 that it had begun an immediate investigation after “many concerned customers in Hong Kong” contacted it about the app and the company found it had endangered law enforcement and residents.

It said the HKMap app “has been used to target and ambush police, threaten public safety, and criminals have used it to victimize residents in areas where they know there is no law enforcement.” Critics said Apple acted after pressure from Beijing in a commentary in the Chinese Communist Party’s official newspaper.

The lawmakers said Apple has censored at least 2,200 apps in China, citing the nonprofit group GreatFire.