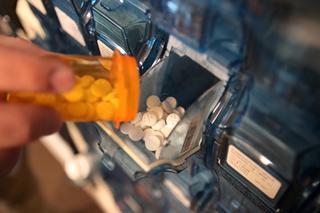 U.S. Legal News July 9, 2019 / 10:32 AM / Updated 4 hours ago U.S. judge strikes down Trump administration rule requiring drug prices in TV ads Tina Bellon, Nate Raymond 4 Min Read (Reuters) - A federal judge on Monday dealt a blow to the Trump administration by striking down a new rule that would have forced pharmaceutical companies to include the wholesale prices of their drugs in television advertising. A pharmacist refills a container in a drug dispensing machine at the Rock Canyon pharmacy in Provo, Utah, U.S., May 9, 2019. REUTERS/George Frey

(Reuters) – A federal judge on Monday dealt a blow to the Trump administration by striking down a new rule that would have forced pharmaceutical companies to include the wholesale prices of their drugs in television advertising.

Mehta in his ruling set aside the entire rule as invalid, saying the HHS lacked authority from the U.S. Congress to compel drug manufacturers to disclose list prices.

PhRMA, the Pharmaceutical Research and Manufacturers of America, is the largest industry lobbying group.

HHS Secretary Alex Azar announced the rule on May 8, saying that forcing drugmakers to disclose their prices in direct-to-consumer TV advertising could help drive down skyrocketing prescription drug costs if the companies were embarrassed by them or afraid they would scare away customers.

The rule was originally suggested in May 2018 as part of Trump’s “blueprint” to lower prescription drug costs for U.S. consumers.

The judge said such disclosures could well be an effective tool in halting the rising cost of prescription drugs. “But no matter how vexing the problem of spiraling drug costs may be, HHS cannot do more than what Congress has authorized,” Mehta concluded.

Many drugmakers have opposed the rule. PhRMA said the list prices could be confusing for patients and discourage them from seeking medical care.

Merck, Eli Lilly and Amgen filed their lawsuit alongside the Association Of National Advertisers trade group on June 14, arguing the rule would confuse consumers by forcing them to disclose a price irrelevant to patients with insurance.

Drugmakers have long argued that list prices do not reflect the actual cost of drugs as they do not take into account discounts and rebates negotiated with health insurers and pharmacy benefit managers to ensure patient access to the medicines.