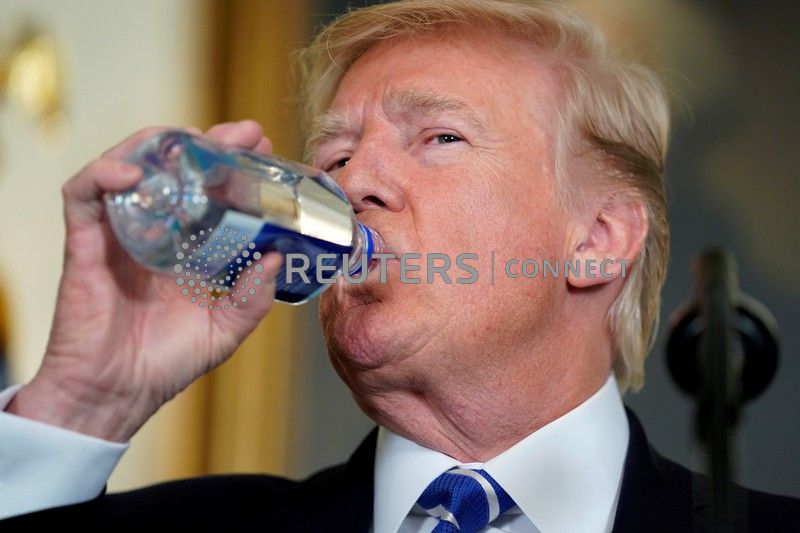 FILE PHOTO: U.S. President Donald Trump takes a drink of water as he speaks about his recent trip to Asia in the Diplomatic Room of the White House in Washington, U.S., November 15, 2017. REUTERS/Joshua Roberts

WASHINGTON (Reuters) – With plastic straw bans gaining popularity to protect the environment, President Donald Trump on Friday posed the question: What about other plastic dining items?

“I do think we have bigger problems than plastic straws,” he told reporters on the White House South Lawn prior to leaving for a weekend in New Jersey.

On a 96-degree day, Trump warmed to the subject.

“You know, it’s interesting about plastic straws: So, you have a little straw, but what about the plates, the wrappers, and everything else that are much bigger and they’re made of the same material?” he pondered.

“Everybody focuses on the straws.  There’s a lot of other things to focus on,” he added.

Trump’s comments coincided with the launch of Trump-branded plastic straws on his online store at $15 for a pack of 10. “Much like most liberal ideas, paper straws don’t work and they fall apart instantly,” his campaign said.

Plastic straw bans and restrictions have been proposed or enacted in U.S. cities including Seattle, Los Angeles, Miami and New York City as part of a growing movement to reduce single-use plastics such as cutlery, cups and bags.

According to the United Nations, more than 60 countries have bans or taxes on single-use plastics.

Plastic straws are one of the top contributors to marine pollution, environmental groups say. Starbucks plans to eliminate plastic straws at its stores globally by 2020.

COVID-19: Fiji Police to investigate those who defied mandatory self-quarantine