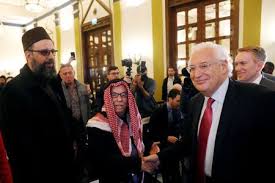 David Friedman, who was appointed by U.S. President Donald Trump, was speaking in Jerusalem at a forum to encourage business links between Israeli settlements and Palestinians.

“There are many, many Palestinians that would like to be freed up to engage in business ventures with Israelis, and they’re entitled to that opportunity,” Friedman told Reuters at the two-day forum attended by Israeli government officials, international businessmen and a handful of Palestinians.

Friedman’s remarks were immediately attacked by Palestinian officials as encouraging settlement activity in the Israeli-occupied West Bank, territory captured in a 1967 war and which Palestinians seek as part of a future state.

“This constitutes a stab in the back of the Palestinian people,” said Wasel Abu Youssef, a member of the Palestine Liberation Organization’s executive committee.

“We warn against any involvement or participation of any Palestinian in projects with settlers, or meetings called by the American ambassador.”

Most of the world considers the settlements illegal under international law, a position Israel rejects. U.S. criticism of Israeli settlement building has died down since Trump took office.

Many Palestinians view engagement with the settlements as “normalisation,” arguing that doing business with Israelis in the West Bank legitimizes their presence and hinders future Palestinian sovereignty.

However, thousands of Palestinians work in settlements, often in manufacturing or construction jobs which they say offer higher wages than similar jobs in Palestinian cities.

Haldun al-Husseini, a Palestinian garment manufacturer from Jerusalem who attended the forum, says business with Israelis is key to improving the Palestinian economy, where unemployment stands at 32 percent.

“Most of my business comes from Israelis,” Husseini said. “If we don’t work together, we will not improve Palestinian lives.”

Palestinian President Mahmoud Abbas severed all political contacts with the White House after Trump recognized Jerusalem as Israel’s capital in 2017 and opened a U.S. embassy in the city last May.

Those decisions delighted Israel, which claims all of Jerusalem, including the eastern sector captured in 1967, as its capital. But the moves dismayed Palestinians who see east Jerusalem as their capital.

Earlier this week, it was revealed the United States Consulate General in Jerusalem, which serves Palestinians, will be absorbed into the new U.S. Embassy to Israel in March, creating a single diplomatic mission for both parties.