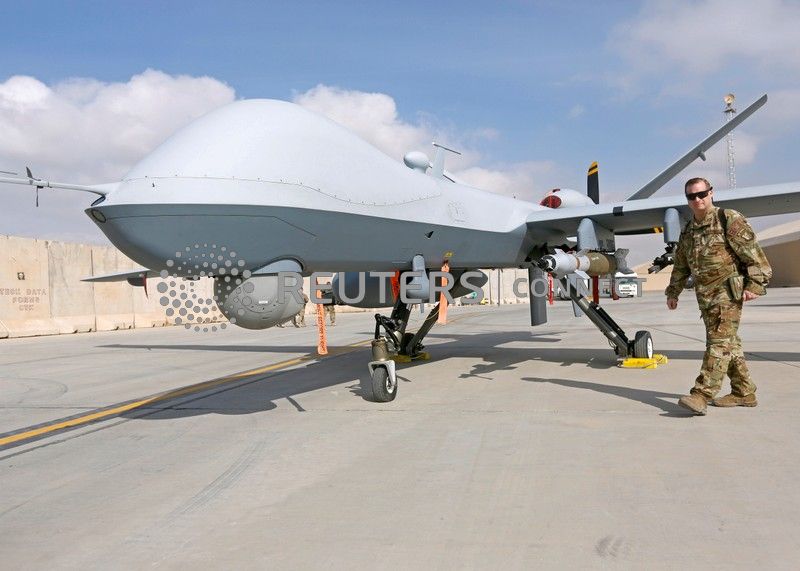 FILE PHOTO: U.S. Air Force officer passes in front of a MQ-9 Reaper drone, one of a squadron that has arrived to step up the fight against the Taliban, at the Kandahar air base, Afghanistan January 23, 2018. REUTERS/Omar Sobhani/File Photo

A Houthi military spokesman had earlier said that air defences had brought down a U.S. drone.

The officials, speaking on the condition of anonymity, said the drone was shot down late on Tuesday.

This is not the first time a U.S. drone has been shot down in Yemen. In June, the U.S. military said that Houthi rebels had shot down a U.S. government-operated drone with assistance from Iran.

The group has taken advantage of a four-year-old war between the Houthi movement and President Abd-Rabbu Mansour Hadi’s Saudi-backed government to try to strengthen its position in the impoverished country.

One of the officials said that it appeared that the armed military drone, made by California-based General Atomics, had been shot down by a surface-to-air missile operated by the Iran-aligned Houthi group.

“It appears to have been fired by the Houthis and enabled by Iran,” the official said, without providing details or specific evidence.

The official said that while losing a drone was expensive, it was not unprecedented and it was unlikely to lead to any major response by the United States.

The other official cautioned that it was too early to tell who was responsible for the incident.

In a statement, the U.S. military said it was investigating reports that a drone had been attacked “in authorized airspace over Yemen.”

“We have been clear that Iran’s provocative actions and support to militants and proxies, like the Iranian-backed Houthis, poses a serious threat to stability in the region and our partners,” the U.S. military’s Central Command said.

The White House said it was aware of the reports and President Donald Trump had been briefed on the matter.

“This attack is only possible because of Iran’s lethal aid to the Houthis and serves as yet another example of the regime’s relentless efforts to escalate conflict and threaten regional stability,” National Security Council spokesman Garrett Marquis said.

Iran rejects accusations from the United States and its Gulf Arab allies that Tehran is providing military and financial support to the Houthis and blames Riyadh for the deepening crisis there.

Overnight, Houthi military spokesman Yahya Saria said that the drone had been shot down.

“The rocket which hit it was developed locally and will be revealed soon at a press conference,” Saria said on Twitter.

“Our skies are no longer open to violations as they once were and the coming days will see great surprises,” he added.

The drone shoot-down comes as tensions between Iran and the United States have risen since Trump’s administration last year quit an international deal to curb Iran’s nuclear ambitions and began to ratchet up sanctions. Iranian officials denounced the new penalties as “economic warfare.”

In June, Iran shot down a U.S. Global Hawk drone, far larger than the MQ-9 drone, and almost led to retaliatory U.S. strikes. Trump later said he had called off the strikes because it could have killed 150 people.