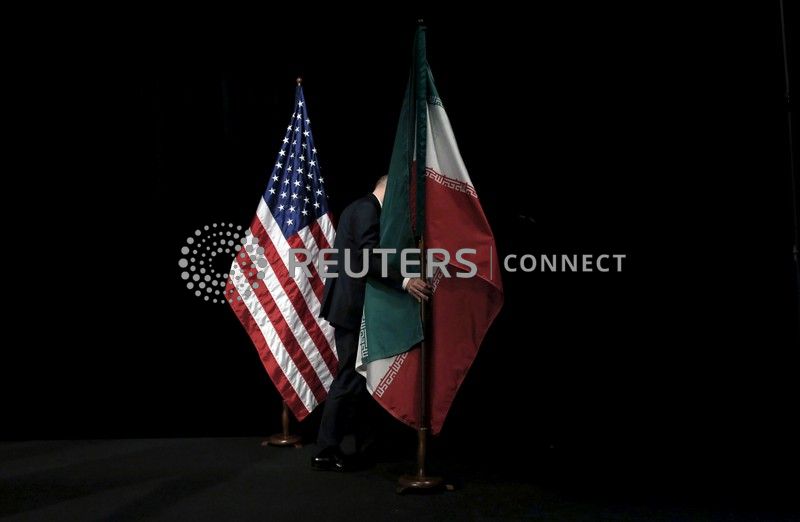 A staff member removes the Iranian flag from the stage after a group picture with foreign ministers and representatives of the U.S., Iran, China, Russia, Britain, Germany, France and the European Union during the Iran nuclear talks at the Vienna International Center in Vienna, Austria July 14, 2015. REUTERS/Carlos Barria/File Photo

But, the State Department said, the renewable waivers would be granted only for 90 days, a shorter period than previously.

The moves are part of the Trump administration’s efforts to impose international political and economic isolation on Tehran that began with the U.S. withdrawal in May 2018 from the 2015 nuclear deal negotiated with Iran by the United States and other world powers.

It was the third punitive action taken against Iran in as many weeks. Last week, it said it would grant no more sanctions waivers for countries buying Iranian oil, accelerating its plan to push Iran’s oil exports to zero. The Trump administration also took the unprecedented step of designating Iran’s elite Revolutionary Guard Corps as a foreign terrorist organisation.

The U.S. actions announced on Friday included an end to a sanctions waiver that allowed Iran to evade a 300-kg limit on the amount of low-enriched uranium it can store under the nuclear deal at its main nuclear facility of Natanz.

The move, State Department spokeswoman Morgan Ortagus said in a statement, is aimed at forcing Iran to end its production of low-enriched uranium, a demand that Iran has repeatedly rejected.

“Iran must stop all proliferation-sensitive activities, including uranium enrichment, and we will not accept actions that support the continuation of such enrichment,” said Ortagus.

Until now, Iran was allowed to ship low-enriched uranium produced at Natanz to Russia before it hit the 300-kg limit, said David Albright of Institute for Science and International Security.

Beginning on Saturday, Ortagus said, the United States also could use sanctions to block any assistance to Iran to expand the Bushehr Nuclear Power Plant, the only such facility in the country.

The plant currently has one working Russian-built reactor, which began operations in 2011, and Iran plans to expand the facility. Moscow signed a deal with Tehran in 2014 to build up to eight more reactors in the country.

Ortagus said that the United States would no longer waive sanctions that allowed Iran to ship to Oman for storage heavy water produced at its Arak facility beyond a 300-tonne limit set in the 2015 nuclear deal.

Heavy water can be employed in reactors to produce plutonium, a fuel used in nuclear warheads.

The renewed sanctions waivers will permit Russia, China, and European countries to continue cooperation programs allowed by the nuclear deal that are designed to ensure that Tehran does not revive its nuclear weapons programme.

U.S. intelligence agencies and the International Atomic Energy Agency say that Iran ended a clandestine programme to develop a missile-borne nuclear warhead in 2003. Iran denies that it ever pursued such a programme.

Under the waivers, China and Britain can continue designing and building a new reactor core for Arak that would make it difficult to produce plutonium.

Russia would be able to continue providing uranium fuel for Bushehr’s single reactor.

The State Department said that a sanctions waiver also was granted to allow the modification of infrastructure at the once-secret Fordow uranium enrichment plant “to help ensure that the facility is no longer used for uranium enrichment.”

It was not clear from the statement if the waiver applied to Russia’s work with Iran to develop at Fordow the capability to produce non-radioactive isotopes.

France would be permitted to continue a civilian nuclear safety training programme.

“We reserve the right to revoke or modify our policy covering these non-proliferation activities at any time if Iran violates its nuclear obligations or commitments or we conclude that such projects no longer provide value in constraining Iranian nuclear activities,” Ortagus said.