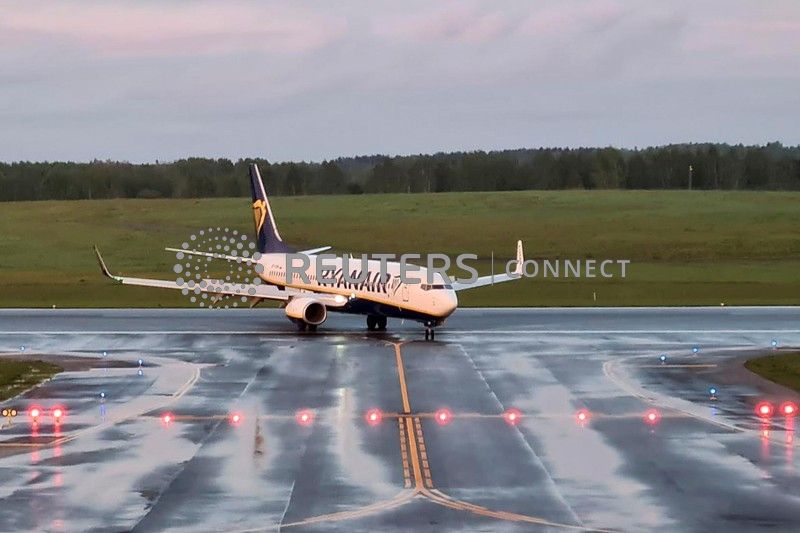 FILE PHOTO: A Ryanair aircraft, which was carrying Belarusian opposition blogger and activist Roman Protasevich and diverted to Belarus, where authorities detained him, lands at Vilnius Airport in Vilnius, Lithuania May 23, 2021. REUTERS/Andrius Sytas

NEW YORK (Reuters) -Four Belarusian government officials have been charged in the United States with aircraft piracy for diverting a Ryanair flight last May to arrest a dissident Belarusian journalist who was on board, U.S. prosecutors said on Thursday.

The charges announced by the U.S. Department of Justice escalate the global uproar over the May 23, 2021, forced landing in Minsk of the Ryanair flight and detention of the journalist Roman Protasevich and his Russian girlfriend.

Belarus already has faced a wave of sanctions, including travel bans and asset freezes, from the United States, the European Union, Britain and Canada over the diverted flight, which U.S. authorities said was targeted by a false bomb threat.

Four U.S. citizens were among the approximately 132 passengers and crew members aboard the flight, prosecutors said.

The defendants were charged in a one-count indictment alleging conspiracy to commit aircraft piracy on a plane where a U.S. national was aboard, violating U.S. federal law.

The Belarus embassy in Washington did not immediately respond to a request for comment.

Thursday’s charges against the Belarusian officials provide one of the most detailed accounts yet of how the fake bomb threat allegedly was used to force Ryanair flight 4978 to land in Minsk so that Protasevich could be arrested.

The diversion was directed by the head of Belarus’ state aviation authority, Leonid Mikalaevich Churo, and a state security official identified as FNU LNU, according to prosecutors, who used acronyms for unknown first and last names.

Lawyers for the defendants could not immediately be identified.

Protasevich, a fierce critic of Belarusian President Alexander Lukashenko, fled the country in 2019 and worked for Nexta Live, a channel on the Telegram messenger app.

Belarusian officials have accused of him being an extremist and inciting social hatred. Protasevich regards the allegations as unjustified political repression.

Protasevich’s channel broadcast and helped coordinate huge protests that shook Belarus after Lukashenko claimed victory in an August 2020 vote that the opposition and Western governments alleged was rigged.

Lukashenko denies vote fraud, and says the country is facing unprecedented external pressure after the United States and its allies imposed sanctions.

Thousands of protesters were arrested in a massive crackdown on the opposition, independent media and other groups.

Prosecutors said Churo and FNU LNU arrived at the Minsk air control center before the flight departed Athens for the Lithuanian capital of Vilnius, where Protasevich lived, and conveyed the fake bomb threat to air traffic controllers.

The pair allegedly ensured the aircraft would be diverted to Minsk by barring the controllers from alerting authorities in neighboring Ukraine of the alleged fake threat while the flight was in their airspace, the prosecutors said.

Once in Belarusian airspace, the pilots were informed of the alleged bomb, told it would explode if they diverted to Vilnius, and given other information to make the threat appear credible, according to the prosecutors.

After landing, the passengers were ordered onto airport buses and detained at the terminal, where Protasevich and his girlfriend Sofia Sapega were led away.

Belarusian officials then began a cover-up, prosecutors said. It included Kazyuchits ordering subordinates to “create false incident reports,” including one showing that the fake bomb threat was received at about the time the flight entered Belarusian airspace.

U.S. Attorney Damian Williams in a statement said the defendants undermined global efforts to keep the skies safe “to further the improper purpose of repressing dissent and free speech.”

After being detained in Minsk, Protasevich and Sapega were placed under house arrest.