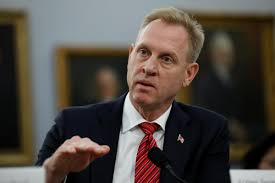 WASHINGTON (Reuters) – U.S. acting Defense Secretary Patrick Shanahan said on Monday that he had approved sending a carrier strike group and bombers to the Middle East because of indications of a “credible threat by Iranian regime forces.”

U.S. national security adviser John Bolton said on Sunday that the United States was deploying the Abraham Lincoln carrier strike group and a bomber task force to the Middle East to send a message to Iran.

“(It) represents a prudent repositioning of assets in response to indications of a credible threat by Iranian regime forces,” Shanahan said on Twitter.

Shanahan in his tweet provided no details on the threat.

Three U.S. officials, speaking on the condition of anonymity, told Reuters on Monday that “multiple, credible threats” picked up by intelligence were primarily against U.S. forces in Iraq by Iran and its proxy forces. They said there was also concern about U.S. forces in Syria and in the waters nearby.

One of the officials said the intelligence was specific enough that it detailed the locations of potential attacks against U.S. forces and the time frame within which it could occur. The official added that the threat was not only against U.S. forces in Iraq but those coming in and out of the region.

The action marked the latest in a series of moves by President Donald Trump’s administration aimed at ratcheting up pressure on Iran in recent months.

The Trump administration’s efforts to impose political and economic isolation on Tehran began last year when it unilaterally withdrew from the nuclear deal it and other world powers negotiated with Iran in 2015.

U.S. Secretary of State Mike Pompeo, speaking in Finland where he was attending the Arctic Council meeting, said on Monday the United States has seen activity from Iran that indicated a possible “escalation,” one day after the United States said it would send a carrier strike group to the Middle East to counter a “credible threat by Iranian regime forces.”