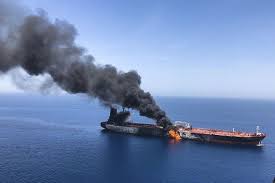 An oil tanker is seen after it was attacked at the Gulf of Oman, June 13, 2019. ISNA/Handout via REUTERS

DUBAI/WASHINGTON (Reuters) – Two oil tankers were attacked on Thursday and left adrift in the Gulf of Oman, driving up oil prices and stoking fears of a new confrontation between Iran and the United States, which blamed Tehran for the incident.

“It is the assessment of the United States government that the Islamic Republic of Iran is responsible for the attacks that occurred in the Gulf of Oman today,” U.S. Secretary of State Mike Pompeo told reporters in a brief appearance without providing hard evidence to back up the U.S. stance.

“This assessment is based on intelligence, the weapons used, the level of expertise needed to execute the operation, recent similar Iranian attacks on shipping, and the fact that no proxy group operating in the area has the resources and proficiency to act with such a high degree of sophistication,” Pompeo said.

Washington accused Tehran of being behind a similar attack on May 12 on four tankers in the same area, a vital shipping route through which much of the world’s oil passes.

Tensions between Iran and the United States, along with its allies including Saudi Arabia, have risen since U.S. President Donald Trump pulled out of a deal last year between Iran and global powers that aimed to curb Tehran’s nuclear ambitions.

Iran has repeatedly warned it would block the Strait of Hormuz, near where the attacks happened, if it cannot sell its oil due to U.S. sanctions.

No one has claimed Thursday’s attacks and no one has specifically blamed them on any party.

Iranian Foreign Minister Mohammad Javad Zarif described the incidents as “suspicious” on Twitter and called for regional dialogue. Tehran has denied responsibility for the May 12 attacks.

The Saudi-led military coalition, which is battling the Iran-aligned Houthis in Yemen, described Thursday’s events as a “major escalation”.

Russia, one of Iran’s main allies, was quick to urge caution, saying no one should rush to conclusions about the incident or use it to put pressure on Tehran.

U.N. Secretary-General Antonio Guterres told a meeting of the U.N. Security Council on cooperation between the United Nations and the League of Arab States: “Facts must be established and responsibilities clarified.”

He warned that the world cannot afford “a major confrontation in the Gulf region”.

Crude prices climbed as much as 4% after the attacks near the entrance to the Strait of Hormuz, a crucial shipping artery for Saudi Arabia, the world’s biggest oil exporter, and other Gulf energy producers.

“We need to remember that some 30% of the world’s (seaborne) crude oil passes through the straits. If the waters are becoming unsafe, the supply to the entire Western world could be at risk,” said Paolo d’Amico, chairman of INTERTANKO tanker association.

The crew of the Norwegian-owned Front Altair abandoned ship in waters between Gulf Arab states and Iran after a blast that a source said might have been from a magnetic mine. The ship was ablaze, sending a huge plume of smoke into the air.

The crew were picked up by a passing ship and handed to an Iranian rescue boat.

The crew of the second ship, a Japanese-owned tanker, were also picked up safely.