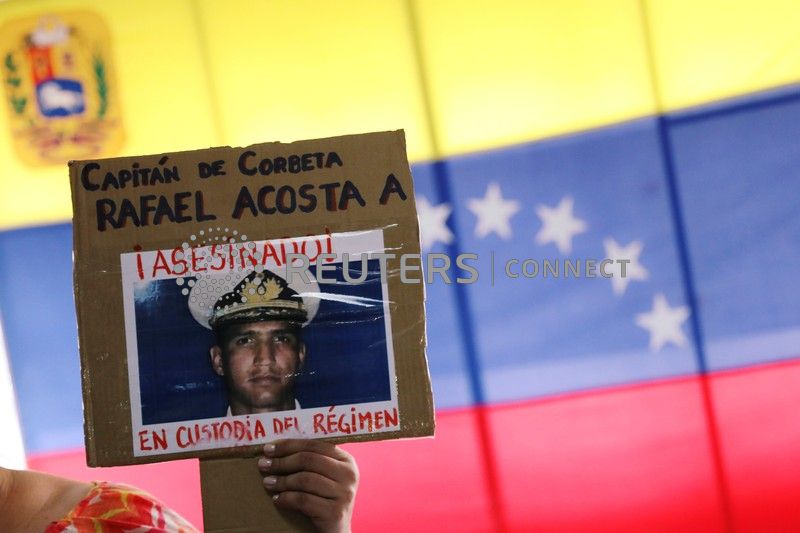 FILE PHOTO: A woman shows a placard with a picture of Rafael Acosta, a navy captain who died while in detention according to his wife, after a news conference in Caracas, Venezuela July 4, 2019. The placard reads, "Murdered in custody of the regime." REUTERS/Manaure Quintero

WASHINGTON (Reuters) – The United States on Thursday imposed sanctions against Venezuela’s military counterintelligence agency following the death of a navy captain after a week in its custody.

The U.S. Treasury said it would freeze all assets directly or indirectly owned by the General Directorate of Military Counterintelligence (DGCIM).

President Nicolas Maduro’s government confirmed the death on June 29 of Rafael Acosta, who was arrested eight days earlier for alleged participation in a coup plot.

Human rights organizations, political leaders and his family have accused the government of torturing Acosta to death.

“Treasury is committed to ending the former Maduro regime’s inhumane treatment of political opponents, innocent civilians, and members of the military in an effort to suppress dissent,” he added.

The Venezuelan authorities buried Acosta’s remains on Wednesday despite opposition from his family, who want an independent autopsy.

Venezuela’s Chief Prosecutor Tarek Saab has said two officials working for DGCIM have been charged with homicide in Acosta’s death, without explaining how Acosta died.

Critics accused Maduro’s government of arbitrary detentions and the systematic use of torture against dissidents and military officers.