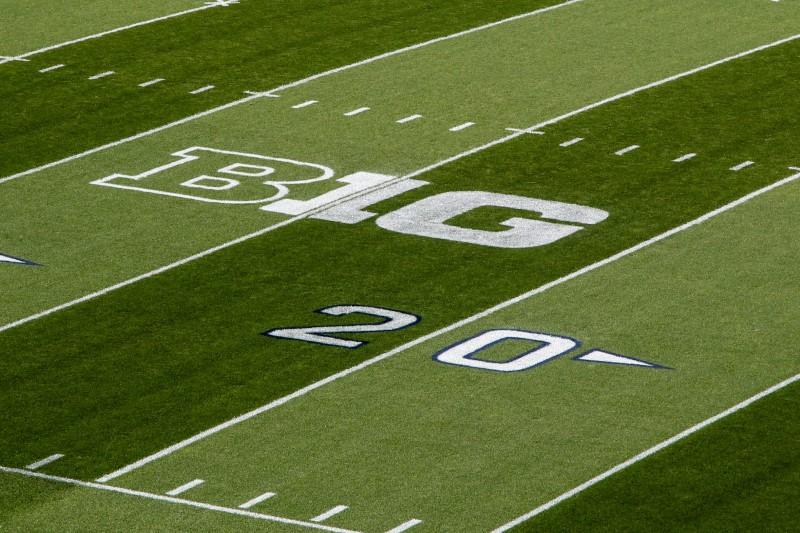 Sep 7, 2019; University Park, PA, USA; A general view of the Big Ten logo prior to the game between the Buffalo Bulls and the Penn State Nittany Lions at Beaver Stadium. Mandatory Credit: Matthew O'Haren-USA TODAY Sports

(Reuters) – Two of the five wealthiest U.S. college sports conferences postponed the fall football season on Tuesday because of the COVID-19 pandemic, a critical blow to both an iconic American cultural tradition and a multibillion-dollar entertainment industry.

The Big Ten and Pac-12 powerhouse members include perennial national football title contenders like the University of Michigan, Ohio State University and the University of Southern California. The Big Ten suspended fall sports, while the Pac-12 said it would not hold any sports competitions for the remainder of the year.

The move leaves the future of college football being played at all this fall in significant doubt as college officials grow ever more wary of their ability to have thousands of unpaid players practice and compete without jeopardizing their safety and contributing to the spread of a highly communicable disease.

“We know that this is a difficult day for our student-athletes, and our hearts go out to them and their families,” Pac-12 Commissioner Larry Scott said in a statement. “We have made clear that all of their scholarships will be guaranteed.”

The conference said it was also calling on the National Collegiate Athletic Association, the governing body for college sports, to extend an additional year of eligibility for student-athletes.

“The mental and physical health and welfare of our student-athletes has been at the center of every decision we have made regarding the ability to proceed forward,” Big Ten Commissioner Kevin Warren said, adding that there is “too much uncertainty regarding potential medical risks” to move forward with the fall sports season.

Pac-12 said it “would consider a return to competition for impacted sports” after the New Year, while the Big Ten will weigh “the possibility of competition in the spring,” for fall athletic programs.

Earlier this year a study conducted for ESPN by Washington University, in St. Louis, said the 65 schools that make up the “Power Five” conferences would collectively lose more than $4 billion in football revenue, with at least $1.2 billion of that due to lost ticket revenue.