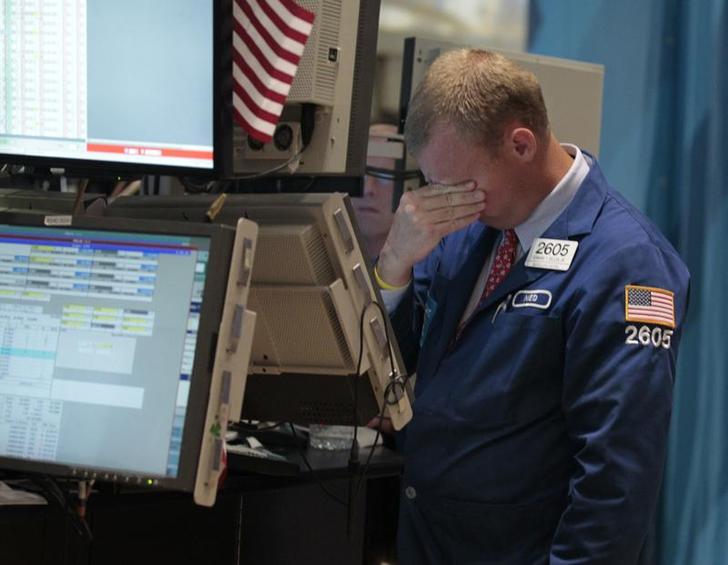 A trader works on the floor of the New York Stock Exchange, August 2, 2011. The S&P 500 turned negative for the year on Tuesday as the wrangling over the U.S. debt ceiling faded and investors turned their attention to the stalling economy. REUTERS/Brendan McDermid (UNITED STATES - Tags: BUSINESS IMAGES OF THE DAY)

(Reuters) – The U.S. economy is strong and Wall Street has reformed practices that contributed to the financial crisis a decade ago, chief executives of some of the largest U.S. banks said in prepared testimony released by the House Financial Services Committee late on Monday.

But in discussing all the progress that has been made, there was also an acknowledgement that scars from the crisis linger, and that many consumers still have a negative perception of the financial industry.

Wednesday will mark the first time the largest U.S. banks have appeared before Congress since the 2008 financial crisis, and will see the CEOs face off against Democratic Representative Maxine Waters and progressives including Alexandria Ocasio-Cortez, who have fiercely criticized Wall Street. Waters leads the committee which vets financial companies on behalf of the U.S. lower house.

As the 2020 election race heats up, U.S. Democrats driven by progressive firebrands like Senators Bernie Sanders and Elizabeth Warren see financial inclusion as a draw for voters.

In their testimonies, the chief executives emphasized a range of regulatory measures including stress tests and so-called “living wills” adopted since 2008 that have helped bolster capital levels and improve the safety and soundness of the U.S. system, as well as other improvements to risk management and culture.

Some banks including Morgan Stanley also emphasized the contribution they make to the U.S. economy through community lending, underwriting and green finance, while also acknowledging the industry needed to do better on liberal issues like diversity.

“We recognize that we have significant work to do to achieve our diversity goals, and that it requires efforts at every level of the firm to deliver results over the long term,” Morgan Stanley CEO James Gorman wrote in his testimony.

Citigroup said the biggest U.S. banks are in a better position to handle an economic downturn at present than they were during the last crisis, adding that the bank has doubled its regulatory capital since the financial crisis despite shrinking its balance sheet by $500 billion over the last decade.

The executives also discussed cybersecurity, diversity initiatives, executive compensation and controversial arbitration clauses in consumer contracts, in response to questions asked by Waters, who invited them to appear.