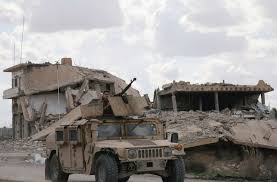 A fighter from the Syrian Democratic Forces (SDF) rides on a vehicle in the village of Baghouz, Deir Al Zor province, Syria February 18, 2019. REUTERS/Rodi Said

AIRBASE IN NORTHEAST SYRIA (Reuters) – The commander of U.S.-backed forces in Syria called on Monday for about 1,000 to 1,500 international forces to remain in Syria to help fight Islamic State and expressed hope that the United States, in particular, would halt plans for a total pullout. The remarks by Mazloum Kobani, the commander-in-chief […]