U.S. and Russia agree to keep talking after meeting on Ukraine 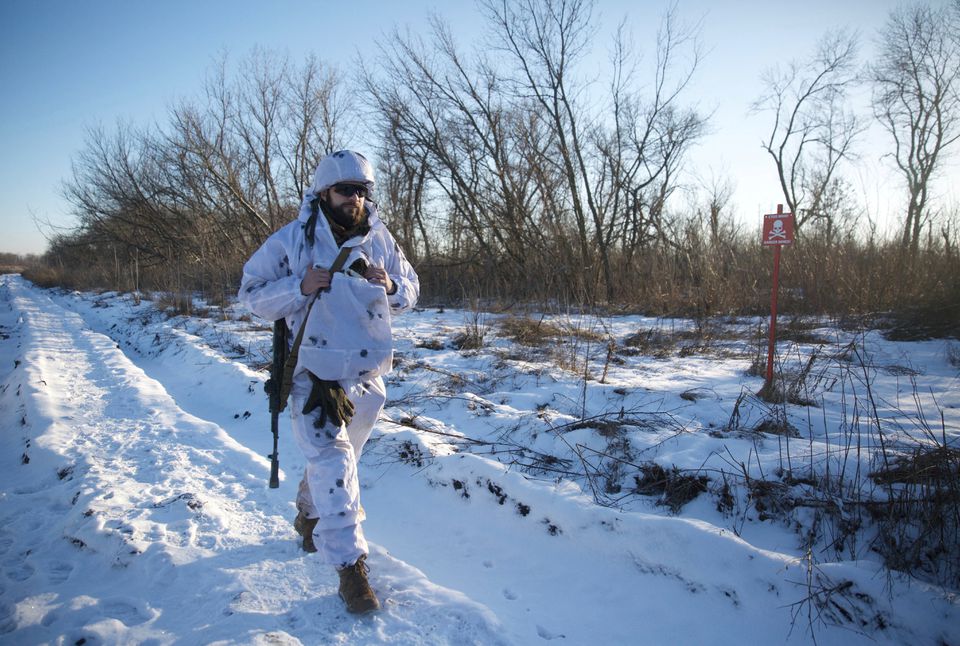 A service member of the Ukrainian armed forces walks at combat positions near the line of separation from Russian-backed rebels near Horlivka in the Donetsk region, Ukraine, January 20, 2022. Picture taken January 20, 2022. REUTERS/Anna Kudriavtseva

GENEVA, Jan 21 (Reuters) – The top U.S. and Russian diplomats made no major breakthrough at talks on Ukraine on Friday but agreed to keep talking to try to resolve a crisis that has stoked fears of a military conflict.

After the talks in Geneva, U.S. Secretary of State Antony Blinken warned of a “swift, severe” response if Russia invades Ukraine after massing troops near its border. Russian Foreign Minister Sergei Lavrov said Moscow was still waiting for a written response to its demands for security guarantees.

But both said they were open to further dialogue, and Blinken saw grounds to hope that mutual security concerns could be addressed.

“Based on the conversations we’ve had – the extensive conversations – over the past week and today here in Geneva I think there are grounds for and a means to address some of the mutual concerns that we have about security,” Blinken said.

He described the talks as “frank and substantive” and said Russia now faced a choice.

“It can choose the path of diplomacy that can lead to peace and security, or the path that will lead only to conflict, severe consequences and international condemnation,” Blinken told reporters, adding that diplomacy would be preferable.

“We’ve been clear – if any Russian military forces move across Ukraine’s border, that’s a renewed invasion. It will be met with swift, severe and a united response from the United States and our partners and allies.”

Lavrov said the ball was in Washington’s court.

Describing the meeting as open and useful, he said Moscow would understand whether talks were on the right track once it had received a written response to its sweeping security demands from the United States.

Russia’s demands include a halt to NATO’s eastward expansion and a pledge that Ukraine will never be allowed to join the Western military alliance.

“I can’t tell you if we’re on the right track or the wrong track. We’ll understand this when we receive the American response on paper to all the points in our proposal,” Lavrov said.

Tatiana Stanovaya, head of political analysis firm R.Politik, commented on Telegram: “This is partly a trap, of course, because any such written response will be used to discredit the U.S. negotiating position.”

Blinken said he expected to share with Russia “our concerns and ideas in more detail and in writing next week” and said he and Lavrov had “agreed to further discussions after that”.

Russia and the United States could hold another meeting next month to discuss Moscow’s demands for security guarantees, Russia’s RIA news agency quoted a source in the Russian delegation as saying.

‘LET’S NOT GET AHEAD OF OURSELVES’

Lavrov said Russia had worries of its own, “not about invented threats, but real facts that no one hides – pumping Ukraine with weapons, sending hundreds of western military instructors”.

Asked about the possibility of a summit between President Vladimir Putin and U.S. President Joe Biden, Lavrov was circumspect.

“Let’s not get ahead of ourselves, President Putin is always ready for contacts with President Biden, it’s clear these contacts need to be seriously prepared,” he said.

Blinken said of another potential meeting between Biden and Putin: “If we conclude, and the Russians conclude, that the best way to resolve things is through a further conversation between them, we’re certainly prepared do that.”

The two presidents met in Geneva in June last year.

Washington’s hopes of building a united front of opposition to Moscow were complicated by Biden’s comments at a news conference on Wednesday in which he suggested that allies might be divided on how to respond to a “minor incursion” by Russia into Ukraine.

Biden and his administration sought to row back on that on Thursday, with the president saying that “if any, any assembled Russian units move across the Ukrainian border that is an invasion”. read more

Before Friday’s meeting, Blinken swung through Europe to try to shore up U.S. allies’ commitments to hit Russia with economic sanctions if it goes ahead with an invasion of Ukraine.

In Kyiv on Wednesday, Blinken assured Ukraine of U.S. support. Blinken, before meeting German, French and British officials in Berlin on Thursday, said Putin could order an invasion imminently.

Blinken spoke with Ukrainian Foreign Minister Dmytro Kuleba over the phone on Friday and briefed him on his meetings with European and Russian officials, the State Department said in a statement, reaffirming Washington’s support for Kyiv.