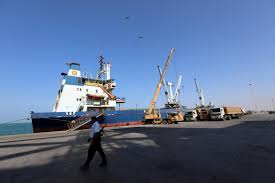 DUBAI (Reuters) – The guns have mostly fallen silent around the Yemeni port of Hodeidah and the skies are clear of warplanes, but a U.N.-sponsored deal for the warring armies to quit the city has stalled, risking efforts to end a conflict that has pushed the country to the brink of famine.

The Iranian-aligned Houthis and the Saudi-backed government agreed to a ceasefire in Hodeidah and to withdraw forces at peace talks in Sweden in December following months of diplomacy and Western pressure to end the nearly four-year-old war that has killed tens of thousands of people.

But the agreement did not spell out who would control Hodeidah city, which is now held by the Houthis while thousands of Saudi-led coalition troops are massed on the outskirts. Both sides were to withdraw their troops by Jan. 7 under the deal.

Sporadic skirmishes have taken place but the truce has put on hold an anticipated assault by the Saudi-led coalition that aid agencies feared would have terrible consequences for civilians.

The air strikes that had rained death and destruction on Hodeidah have also paused, although they have continued in other regions.

In New York on Wednesday, U.N. special envoy Martin Griffiths told the United Nations Security Council that both sides had largely stuck to the ceasefire but substantial progress would be needed before more peace talks could be held.

“There has been a significant decrease in hostilities,” he said.

Griffiths had met the rival leaders in recent days and he said both had expressed determination to find a way forward but all shared the view that “substantial progress, particularly on Hodeidah, is something we would like to see before we reconvene the next consultations”.

The Stockholm pact had stipulated that Houthi forces leave Hodeidah port and two other ports and that international monitors be deployed. The monitors would then oversee a complete withdrawal of troops of both sides from the city, which would be run by “local authorities” under U.N. supervision.

“I am afraid that agreement did not spell out how to build that authority nor who will control what,” a Western diplomat involved in the peace talks told Reuters.

The Houthis said late last month their fighters quit Hodeidah port and handed control to local coast guards units in place before the war. The Saudi-led coalition disputed the move, believing those units were loyal to the Houthis.

The Houthi withdrawal from the ports of Hodeidah, Saleef and Ras Isa would have been met with a retreat by coalition forces from the eastern outskirts of the city, where battles had raged before the ceasefire went into effect on Dec. 18.

Retired Dutch general Patrick Cammaert, head of the Redeployment Coordination Committee tasked with overseeing implementation of the deal, told U.N. chief Antonio Guterres and his envoy Griffiths it was not possible to verify the neutrality of the coast guards in position since the withdrawal of Houthi fighters, two sources familiar with the matter said.

Allegiances among Yemen’s many factions have shifted several times during the conflict that pits the Houthis against the internationally recognized government of Abd-Rabbu Mansour Hadi, which was ousted from the capital Sanaa in 2014.

The Houthis control most urban centers in the Arabian Peninsula country. Hadi’s government is based in the southern port of Aden and controls some western coastal towns.

Disagreements over control of Hodeidah, the main entry point for the bulk of commercial imports and vital aid supplies to Yemen, have delayed the opening of humanitarian corridors needed to reach millions of Yemenis facing starvation.

Saudi Arabia and the United Arab Emirates are leading the Sunni Muslim Arab coalition that intervened in Yemen’s war in 2015 to restore Hadi’s government.

“Houthi manipulations threaten the Sweden agreement and the next steps in the political process,” UAE Minister of State for Foreign Affairs AnwarGargash tweeted on Wednesday.

Houthi spokesman Yahya Sarea said the United Nations must play a stronger role to avoid “the other side taking advantage”.

Guterres has asked the U.N. Security Council to approve the deployment of up to 75 observers to Hodeidah for six months. The council will need to decide by about Jan. 20, when a 30-day authorization for an advance monitoring team expires.

“I don’t think any country will send monitors before a full withdrawal of forces,” one diplomat said.

Yemen descended into war after pro-democracy unrest forced late former president Ali Abdullah Saleh to step down. Hadi was elected to a two-year term to head a transitional government but the Houthis drove him into Saudi exile. The Houthis say they are waging a revolution against corruption.

The conflict is widely seen as a proxy war between Saudi Arabia and Shi’ite Muslim Iran.

The Saudi-led coalition receives weapons and logistical support from the United States, Britain and other Western countries, but their involvement has come under increased scrutiny following the killing of Saudi journalist Jamal Khashoggi at Saudi Arabia’s consulate in Istanbul in October, and over the civilian toll from the air campaign.