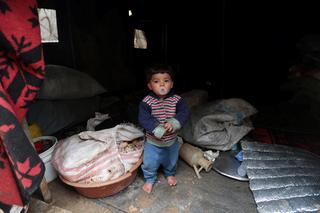 An internally displaced child looks out from a tent, erected at an empty school and university compound used as shelter in Azaz, Syria February 21, 2020. REUTERS/Khalil Ashawi

GENEVA/MOSCOW (Reuters) – The United Nations warned on Friday that fighting in northwest Syria could “end in a bloodbath” and called again for a ceasefire, while Moscow denied reports of a mass flight of civilians from a Russian-led Syrian government offensive.

Syrian troops backed by Russian air power have been battling since December to eliminate the last rebel strongholds in the region in a war that has killed an estimated 400,000 Syrians, displaced millions more and left much of the country in ruins.

The latest offensive in the regions of Aleppo and Idlib has uprooted nearly 1 million people – most of them women and children – who have fled clashes to seek sanctuary further north, near the Turkish border.

The U.N.’s humanitarian agency OCHA said 60% of the 900,000 people trapped in a shrinking space after fleeing are children.

Venus inviting others to join her virtual workouts