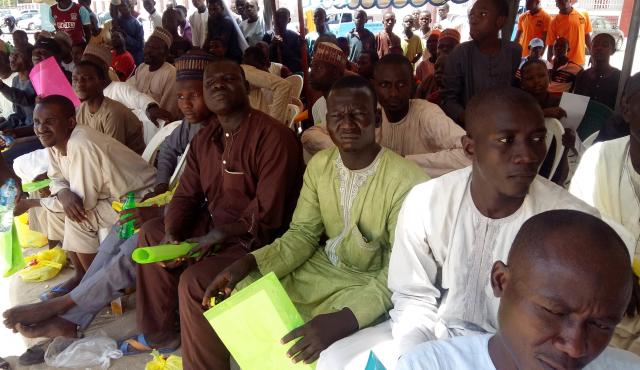 Young men, who were released from the ranks of a militia group fighting against the Islamist militant group Boko Haram, are pictured during a handover ceremony in the city of Maiduguri, Nigeria, October 12, 2018. REUTERS/Kolawole Adewale

GENEVA (Reuters) – A militia fighting against the Islamist militant group Boko Haram in northeast Nigeria has released 833 children from its own ranks, some as young as 11, the U.N. children’s agency UNICEF said on Friday.

UNICEF spokesman Christophe Boulierac said the Civilian Joint Task Force (CJTF) was formed in 2013 by vigilante groups in Borno state to fight Boko Haram which itself gained international notoriety for kidnapping schoolgirls in the town of Chibok.

The CJTF signed an action plan in September 2017 to end child recruitment, and the release of the children, 40 percent of whom were 15 or younger, was its first formal release.

“This is a significant milestone in ending the recruitment and use of children, but many more children remain in the ranks of other armed groups in either combat or support roles,” UNICEF Nigeria Deputy Representative Pernille Ironside said in a statement.

The released children were among 1,175 boys and 294 girls who had been identified as being associated with the CJTF in the city of Maiduguri, UNICEF said, although the total has yet to be verified and could include another 2,200 or more children.

It said that it had supported the social and economic reintegration of more than 8,700 children released from armed groups since 2017, helping trace their families, returning them to their communities and offering them psycho-social support, education, vocational training and informal apprenticeships.

Boulierac said that the CJTF included children who were “pursuing military objectives” but also many in support roles, so their reintegration into society might be easier than those released from an armed group like Boko Haram.

That Islamist group has kidnapped thousands since it began an insurgency in 2009 aimed at creating an Islamic state in the northeast.

“As far as the Nigerian government is concerned, the CJTF is a local intelligence gathering group. The defense ministry does not have any evidence of armed soldiers who are under age,” said presidency spokesman Garba Shehu, who spoke on the phone.

Nigeria’s government has said since December 2015 that Boko Haram has been “technically defeated”, 20 months after the kidnap of the 270 Chibok girls.

Yet attacks continue in the northeast, while Islamic State West Africa, which splintered off from Boko Haram in 2016, holds territory around Lake Chad.