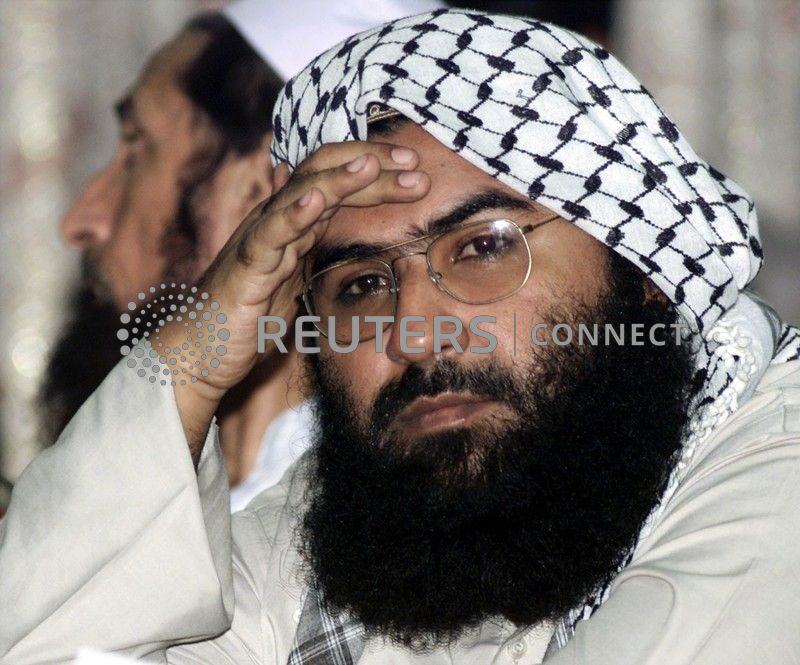 UNITED NATIONS/ISLAMABAD (Reuters) – A U.N. Security Council committee blacklisted the head of the Pakistan-based militant group Jaish-e-Mohammed (JeM) on Wednesday after China dropped its objection to the move, ending a decade-long diplomatic impasse.

Pakistan’s ally China had repeatedly opposed efforts at the United Nations by Western powers to directly sanction JeM founder Masood Azhar, even though the group had already been blacklisted by the U.N. Security Council in 2001.

JeM has carried out several high-profile attacks in India and claimed responsibility for a February suicide bombing that killed at least 40 Indian paramilitary police in Indian-controlled Kashmir, an attack that brought the two nuclear-armed neighbours to the brink of war.

However, to win China’s support for the sanctioning of Azhar, the United States, Britain and France removed a reference to the February attack in the Indian city of Pulwama from their request to the U.N. Security Council’s Islamic State and al Qaeda sanctions committee.

The 15-member committee, which operates by consensus, agreed on Wednesday to subject Azhar to an arms embargo, travel ban and asset freeze.

Azhar’s freedom within Pakistan has been a sore point in the relationship between Western countries and Pakistan, and has led to repeated accusations by India that Islamabad uses and harbours militant groups to further its foreign policy agenda. Pakistan denies such accusations.

A senior U.S. administration official, speaking on condition of anonymity, acknowledged that Pakistan had taken some steps against Jaish-e-Mohammed after the Pulwama attack.

“However, there are additional steps that Pakistan could take to show an irreversible commitment and to permanently put these kinds of groups out of business,” said the official, also citing militant groups Lashkar-e-Taiba and the Haqqani network.

“These steps could include arresting leaders and disrupting their ability to communicate and travel, shutting down affiliated business and charity wings,” the official said.

After the February attack, the United States, Britain and France asked for Azhar to be sanctioned. But the move was opposed by China, which said it wanted more time to study the request. Beijing had previously prevented the sanctions committee from imposing sanctions on Azhar, including in 2016 and 2017.

After further negotiations, they instead submitted the revised request to the committee on Sunday to sanction Azhar.

“I would like to emphasize that Pakistan has made enormous contributions to the fight against terrorism, which should be fully affirmed by the international community. China will continue to firmly support Pakistan’s efforts to fight terrorism and extremist forces,” Geng added, without elaborating.

“We’re going to enforce this decision forthwith,” Faisal told reporters in the capital, Islamabad, referring to the travel ban and asset freeze.

In a statement, India’s foreign ministry welcomed the sanctioning of Azhar as “a step in the right direction to demonstrate the international community’s resolve to fight against terrorism and its enablers.”

JeM, a predominantly anti-India group, also forged ties with al Qaeda. In December 2001, JeM fighters, along with members of Lashkar-e-Taiba, attacked India’s parliament, which almost led to a fourth war between the two countries.

The February attack in Indian-controlled Kashmir prompted India to carry out an aerial bombing mission inside Pakistan, the first such move since a 1971 war. Pakistan carried out its own aerial bombardment the following day, and the two countries even fought a brief dogfight over Kashmir skies.

Tensions began to ease when Pakistan, amid pressure from global powers, returned a downed Indian pilot shot down over Pakistan-controlled Kashmir.

Pakistan has been on a charm offensive in recent months to avoid the country being blacklisted by a global financial body, the Financial Action Task Force (FATF), which monitors money laundering and terrorism financing.

Islamabad has vowed to crack down on anti-India militants and other groups operating on its soil. It has shut down some madrassas linked to violent groups and as part of the crackdown also detained relatives of Azhar in “protective custody”.

“It’s too early to say whether Pakistan will indeed uphold its international obligations, but we remain hopeful,” the senior U.S. administration official said.