Typhoon Yutu leaves one dead, others injured on Saipan 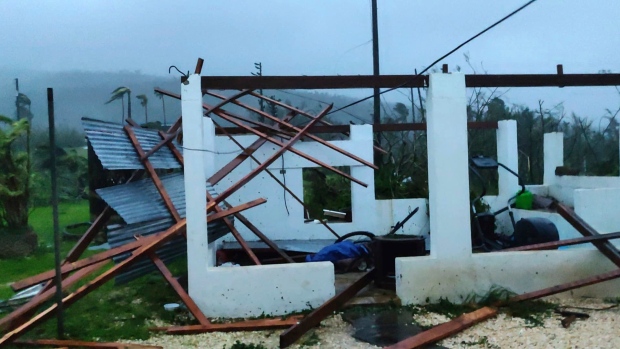 SAIPAN, 26 OCTOBER 2018 (PACIFIC ISLAND TIMES) – A woman was killed during the onslaught of Super Typhoon Yutu and some others sustained minor injuries caused by projectiles brought by the Category 5 cyclone’s destructive sustained winds that reached 180 miles per hour.

Yutu barreled through the CNMI Wednesday night and continued wreaking havoc early Thursday morning leaving a trail of destruction and panic to some.

The saddest news is the confirmed death of a 44-year-old woman who sought shelter in an abandoned building that collapsed on her in Chalan Kanoa. No other details of the woman’s identity were released while the CNMI and its federal partners are focused on recovery and relief efforts especially to the individuals badly affected by what could be the worst storm system that hit the Marianas.

More than three years since Typhoon Soudelor leveled the island of Saipan, residents of the island again battled and experienced tornado like winds this time brought by Yutu. Soudelor devastated Saipan on Aug. 2, 2015 and this time Oct. 24, 2018 will also be remembered in the CNMI’s history as the day that the islands were once again swept by a destructive force of nature. This also comes more than a month after the CNMI’s southern island of Rota was ravaged by Typhoon Mangkhut.

As the morning sun rose Thursday, island residents of Saipan and the nearby island of Tinian—who only slept a few hours for fear of losing their lives — were greeted with fallen decades-old trees, downed concrete and wooden power poles, damaged houses and other properties, and the once lush greenery stripped once again.

Streets were littered with tin roofing that flew off from houses, power transformers, power cables, wood and other debris either from houses or nearby commercial establishments. There were also reported looting in several stores and warehouses but was immediately stopped by personnel of the said businesses.

Meanwhile, the government of Guam is spearheading a boot drive on Friday to help Northern Marianas residents who were affected when Yutu battered Saipan and Tinian early Thursday morning.

“Our brothers and sisters in Saipan and Tinian felt the worst of Super Typhoon Yutu. It is in times like these where we band together as a family and help each other stand again,” Guam Gov. Eddie Calvo said.

The boot drive will be at major intersections from 4pm to 6 pm on Friday, Oct. 26.

“The people of Guam have always been able to lend a helping hand — whether it was a local family who lost their home in a fire or a neighboring community devastated by mud slides — our capacity to love others and do what we can to help is at the core of who we are as a people. Tomorrow, I ask that we all dig a little deeper and do what can to help our brothers and sisters who faced a super typhoon and need our help to recover,” Lt. Gov. Ray Tenorio said.

On Guam, government operations and private businesses will be back to normal starting Friday.

Pursuant to the Guam Comprehensive Emergency Management Plan, the Offices of Guam Homeland Security and Civil Defense (GHS/OCD) and other Government of Guam (GovGuam) support agencies have begun conducting an island-wide Preliminary Damage Assessment (PDA) following the passage of Yutu that affected Guam.

In connection with this, businesses and farms that suffered damages to facilities, equipment and merchandise, and/or incurred costs relative to emergency protective services or debris clean-up as a result of Typhoon Yutu, are requested to submit respective PDAs.

Teams from GovGuam agencies, led by BSP and teams from DA will be conducting damage assessments by interviewing business owners/managers and farm owners, respectively, through Nov. 2. The results of the PDAs will equip GHS/OCD with information needed to make the determinations on what assistance programmes, if any, can be brought in to support farms and businesses.