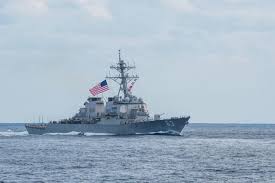 WASHINGTON (Reuters) – The U.S. military said it sent two Navy warships through the Taiwan Strait on Sunday as the Pentagon increases the frequency of movement through the strategic waterway despite opposition from China. The voyage risks further raising tensions with China but will likely be viewed by self-ruled Taiwan as a sign of support from […]