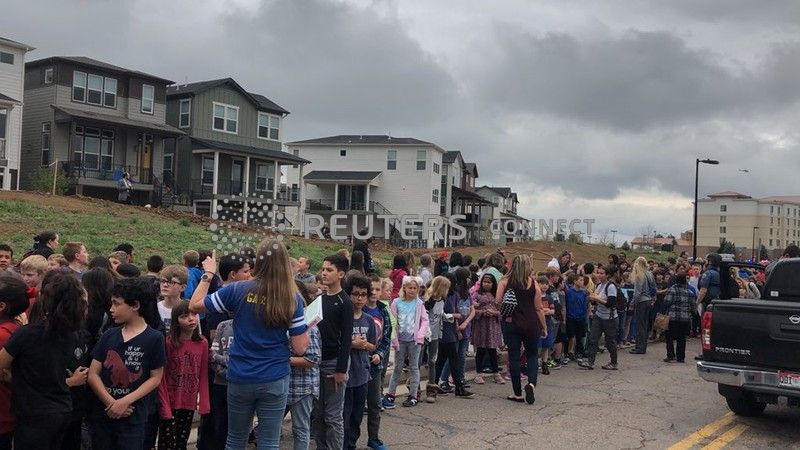 People wait outside near the STEM School during a shooting incident in Highlands Ranch, Colorado, U.S. in this May 7, 2019 image obtained via social media. SHREYA NALLAPATI/VIA REUTERS

(Editor’s note: Some readers may find language in paragraph 8 offensive)

Two surviving victims of the attack at the Science, Technology, Engineering and Math (STEM) School in Highlands Ranch, a Denver suburb, remained in serious condition, medical officials said. Others were stable or had been discharged from hospital.

“Two individuals walked into the STEM school, got deep inside the school, and engaged students in two separate locations,” Spurlock said.

He told Reuters in a brief interview that the suspects, each armed with a handgun, opened fire in two separate classrooms. Devon Erickson, 18, was named as one of the suspects, while the other was identified only as a juvenile.

The school serves students from kindergarten through to 12th grade.

Television images showed police vehicles gathered outside a suburban house about 2 miles (1.2 km) from the school, where Erickson was believed to live.

Police towed a white car with “FUCK SOCIETY” spray painted in blue on one side away from the house.

Sheriff’s deputies arrived at the school, located about 25 miles (40 km) south of Denver, within two minutes of the first reports, Spurlock said, and “engaged the suspects.”

Police dispatch tapes recorded officers looking for one suspect with black hair wearing a Nirvana hoodie and one with purple and black hair and a black hoodie.

Law enforcement officials declined to comment on a possible motive for the rampage, saying it was too early in the course of the investigation, which was being assisted by the Federal Bureau of Investigation.

Colorado ABC affiliate Denver 7 reported a combination of factors, including revenge and anger, spurred the attack. One suspect faced bullying for wanting to change from female to male and identifying as a male, the station said, citing law enforcement sources.

The shooting occurred less than a month after the 20th anniversary of the Columbine High School massacre in nearby Littleton, about 5 miles (8 km) from the Highlands Ranch school. Two Columbine students killed 13 people there in 1999 before committing suicide in what remains one of the deadliest school shootings in U.S. history.

A man who identified himself as Fernando Montoya said his 17-year-old son, a junior at STEM, was shot three times and that one of his son’s friends was also wounded.

Montoya said his son told him that one shooter walked into his classroom and opened fire.

“He said a guy pulled a pistol out of a guitar case and started to shoot,” Montoya told Denver 7.

Medical helicopters landed and took off outside the school as the incident unfolded. Elementary school children left the building in single file with their hands on their heads.

Police officers with rifles stood by a group of high schoolers huddled behind dumpsters, many of them typing on their phones.

Stunned kindergarten children and weeping high school students were reunited with their parents at a nearby recreation center.

The White House offered a message of condolence. “Our prayers are with the victims, family members, and all those affected by today’s shooting,” White House spokesman Judd Deere said.

Some of the worst mass shootings in the United States have occurred in Colorado. In addition to Columbine, a man opened fire at a movie theater in Aurora, another Denver suburb, in 2012, killing 12 people and wounding scores more.

Tuesday’s bloodshed in Colorado came a week after a gunman opened fire on the Charlotte campus of the University of North Carolina, killing two people and wounding four others. A 22-year-old former student of the university has been charged with murder and attempted murder in that case.