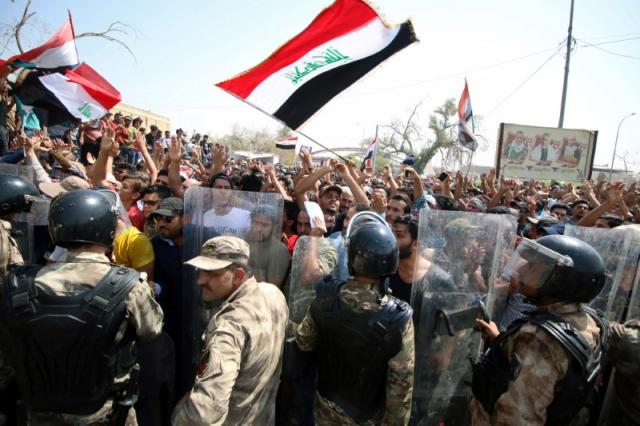 BASRA, Iraq (Reuters) – Two protesters were killed on Sunday in clashes with Iraqi security forces in the town of Samawa, a police official said, amid growing anger in southern cities over poor public services and widespread corruption.

The unrest is piling pressure on Prime Minister Haider al-Abadi, who hopes to serve a second term once politicians form a new government following a May 12 parliamentary election tainted by allegations of fraud.

“Hundreds of people tried to storm a courthouse. Shots were fired toward us. It was not clear who was shooting. We had no choice but to open fire,” said the police official in Samawa.

Earlier, police in oil hub Basra wounded 48 people when they fired in the air to disperse a crowd of hundreds that tried to storm a government building and demonstrated near an oil field.

Some 28 members of the security forces were also wounded, according to Major General Thamir al-Hussaini, commander of the Interior Ministry’s Rapid Response Forces.

In a town near the southern city of Amara, police shot into the air to disperse protesters after demonstrators set fire to the municipality building. Thirteen protesters and seven policemen were wounded in the clashes.

Sistani, who has millions of followers, rarely intervenes in politics, but has wide sway over public opinion.

Any disruption could severely impact the country’s limping economy and push up global oil prices.
STRUGGLE TO REBUILD

“The Dawa party has been running Iraq for 15 years and its leaders failed to live up to even a single promise they made,” said Ziad Fadhil, 38, who is unemployed, in Basra. He held up a piece of cardboard to shield his head from the scorching sun.

Earlier on Sunday, Jordan’s state airline said it had suspended four weekly flights to Iraq’s holy city of Najaf due to the “security situation at its airport”. Flyudubai followed suit.

Flights from Iran to Najaf will be diverted to Baghdad, Iranian state television reported.

A political bloc led by populist cleric Moqtada al-Sadr unexpectedly won a majority in May’s vote on an anti-corruption platform that had appeal across Iraq’s electorate.

Abadi has said his caretaker government will release funds to Basra for water, electricity and health services but major relief is unlikely to come soon for the city once dubbed the “Venice of the Middle East” for its network of canals.

Iraq needs to generate billions of dollars to rebuild after its three-year war with Islamic State.

Saddam Hussein oppressed Iraq’s majority Shi’ites, neglecting their southern heartland, and successive Shi’ite-led governments after him have done little to improve lives there.

“Since the fall of Saddam in 2003 and until now the only real thing Shi’ite politicians have been saying is their lies,” said Usama Abbas, 25, an unemployed college graduate in Basra, where oil money rarely trickles down to the population.

“We still drink filthy water and forgot what air conditioning means during summer.”

In addition to local government headquarters, the demonstrators have taken the unusual step of attacking buildings belonging to powerful Shi’ite militias.

Abadi, who also serves as commander-in-chief of Iraq’s armed forces, issued a nationwide order on Sunday placing security forces on high alert in the southern provinces, aiming to stem the burgeoning protests.