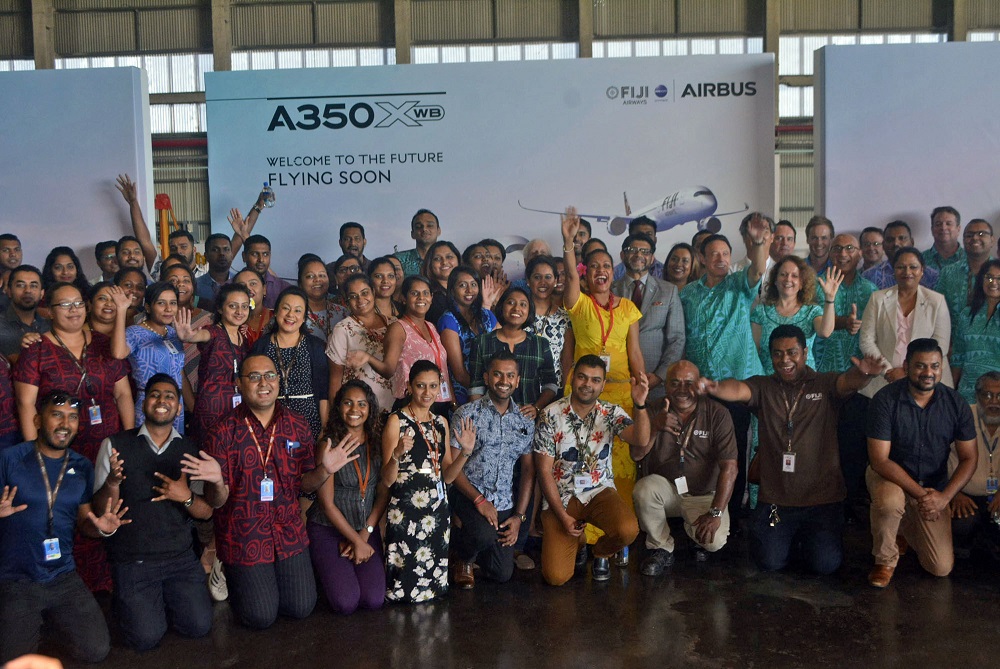 Attorney General and Minister for Economy Aiyaz Sayed Khaiyum with the management and staff of Fiji Airways during the announcement of the Fiji Airways 2018 Financial Year Results in Nadi. Picture: REINAL CHAND

NATIONAL carrier Fiji Airways will take delivery of two Airbus A350-900 XWB aircraft as an addition to its wide-bodied fleet later this year.

This comes after two years of talks carried out between the airline, aircraft manufacturers and 16 leasing companies.

While the airline could not announce the total funds invested in this project, Mr Viljoen highlighted the list price for an A350 was nearly $US300m ($F644m).

He added the aircraft was selected to be a part of the airline’s wide-bodied fleet and would operate to destinations such as Los Angeles, US and Sydney, Australia.

The aircraft brings with it added seats, 33 in business class and 301 in economy, with a 25 per cent reduction in fuel usage and increased cargo capacity.

The deal also secures Fiji Airways’ existing partnership with Airbus, the French aircraft manufacturer scheduled to deliver the first A350 this November.

The second will arrive in December.

Mr Viljoen said this was in line with the 8 per cent growth trajectory targeted in the airline’s five-year plan.

“We commenced a thorough process, we describe it as a rigorous, extensive and transparent process,” he said.

Mr Sayed-Khaiyum thanked the team and board members of Fiji Airways to arrive at the decision of securing the new aircraft.

“Any wide-bodied aircraft that has the ability to fly longer distances means that Fiji as a country is opening itself up further to the rest of the world,” he said.

“There is an expected global slowdown and as any wise government would want to do, to be able to mitigate our risks. So we need to go beyond the traditional markets and Fiji Airways is critically important to that agenda.”

“The A350 will be powered by the Rolls-Royce Trent XWB engines and this is the world’s most efficient, large aeroengine flying today and the world’s fastest selling wide-bodied engine with more than 1800 in service or on order.”

The arrival of the new aircraft will bring the wide-bodied fleet to eight, and total fleet size to 19.