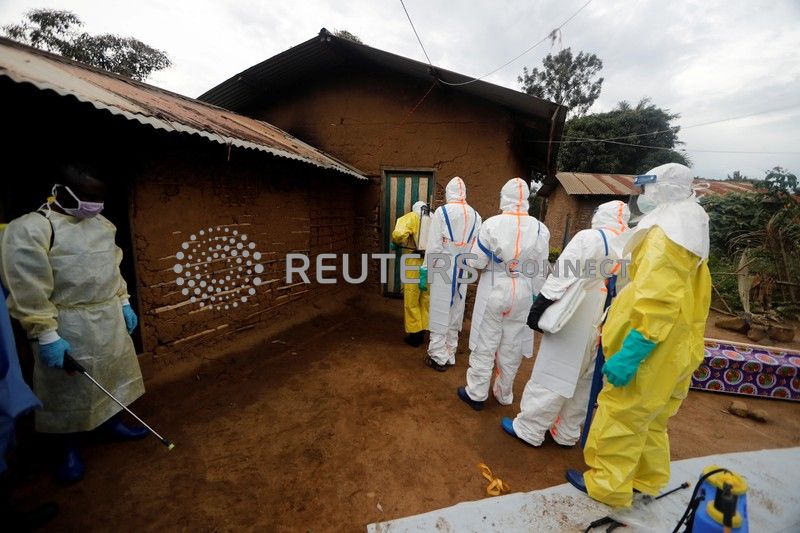 FILE PHOTO: Kavota Mugisha Robert (L), a healthcare worker who volunteered in the Ebola response, stands with decontamination gear as his colleague prepare to enter a house where a woman, 85, is suspected of dying of Ebola in the Eastern Congolese town of Beni in the Democratic Republic of Congo, October 8, 2019. REUTERS/Zohra Bensemra/File Photo

GENEVA (Reuters) – The Ebola virus has infected two more people in Equateur province in the western Democratic Republic of Congo and spread to a new area 150 km (93 miles) away from the original six cases, the World Heath Organization said on Wednesday.

On Monday Congolese authorities confirmed tests showing that four people had died of Ebola in the western city of Mbandaka.

Congo had been preparing to declare itself Ebola-free this month. An epidemic of the virus on the other side of the country has killed more than 2,200 people since 2018.

The two outbreaks are the same strain of the virus, which means the same vaccines can be used to help contain its spread, health officials say, although they are not thought to be linked.

“The latest person confirmed with Ebola attended the burial of one of the first cases, but was detected in the town of Bikoro, 150 kilometres away from Mbandaka,” WHO Director-General Tedros Adhanom Ghebreyesus told journalists.

“This means that two health zones are now affected.”

Mbandaka suffered a small Ebola outbreak in 2018 in which 33 people died.

The use of a vaccine and swift containment efforts including mobile hand-washing stations and a door-to-door education campaign kept it at bay.

On Wednesday almost 50 health workers from WHO and its partners arrived in Mbandaka with 3,600 doses of Ebola vaccine and 2,000 cartridges for lab testing, Tedros said.

The Ebola virus causes hemorrhagic fever and is spread through direct contact with body fluids from an infected person, who suffers severe vomiting and diarrhoea. Ebola is endemic to Congo whose Ebola river gave the virus its name when it was discovered there in 1976.

Congo’s health system, which has been hobbled by decades of war and mismanagement, is fighting the world’s worst measles epidemic as well as the coronavirus pandemic, which has infected over 3,000 and killed 75 people.